Tatneft proposed report of Shadegan oilfield study to the NISOC. 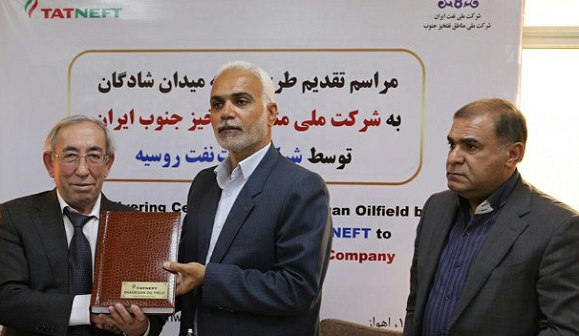 Results of studies carried out by Russia’s Tatneft on Shadegan oil field were presented to NIOC at a ceremony which was attended by several directors of the Iranian and Russian firms.

NISOC had inked a MoU with Tatneft 1 year ago to outsource its development plan to the Russian company.

Indeed, as many as 44 companies have been conducting studies on Shadegan field 2 of which have presented their results so far.

The Shadegan oilfield is an oilfield located in Khuzestan Province, in the southwest of Ahvaz City.

It was discovered in 1968 and its production started after installing production facilities in 1988.

The field is 23 kilometers in length, 6 kilometers in width and includes 2 Asmari and Bangestan reservoirs and currently with 20 active wells, oil production is about 69,000 barrels per day.

123
Rosneft may have terminated oil supply deal with China CEFC

156
Gazprom looking to maintain and strengthen its leadership position in Europe while expanding into Asia
Advertising at neftegaz.ru