Glencore expects CEFC to close deal for 14.16% stake in Rosneft in H1

Glencore expects a deal under which China's CEFC will receive a 14.16% stake in Rosneft from a consortium to be completed in the 1st half of the year.

Glencore expects a deal under which China's CEFC will receive a 14.16% stake in Rosneft from a consortium including Glencore and the Qatar Investment Authority to be completed in the 1st half of the year, Platts reported on February 21, 2018.

«The transaction, subject to customary regulatory approval processes, is expected to complete in H1 2018,» Glencore said in preliminary results for 2017 released Wednesday.

CEFC agreed to buy the stake in September, in a deal worth an estimated $9 billion. Upon completion of the deal Glencore will hold a 0.5% stake in Rosneft and QIA a 4.7% stake. CEFC will become the 2nd-biggest minority shareholder in Rosneft after BP. Russia's Rosneftegaz also holds a 50% stake in Rosneft.

CEFC's agreement came less than a year after QIA and Glencore took a 19.5% stake in Rosneft in a deal worth $10.8 billion. This included Glencore paying Eur300 million for a 0.54% equity stake in Rosneft and the right to offtake over 220,000 b/d of Rosneft crude for the next 5 years.

The remaining Eur10.2 billion came from QIA, also a Glencore shareholder, and non-recourse bank financing, which came from Italy 's Intesa Sanpaulo bank in the amount of Eur5.2 billion. Rosneft CEO Igor Sechin said previously that the CEFC deal would see the QIA and Glencore consortium retain only the stake it had covered with direct financing. 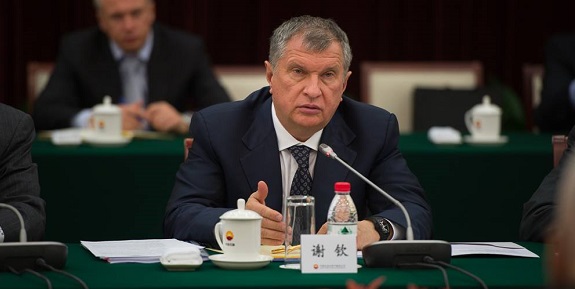 Rosneft has described CEFC as a strategic partner, and in September signed an agreement to consider joint exploration and production projects in Siberia, as on refining, petrochemicals and crude and product trading. In September Rosneft and CEFC signed a 5-year supply contract, which envisages supplies of up to 60.8 million mt, or 244,200 b/d of crude from the beginning of 2018.

The price of each delivery will be set in line with a formula based on market oil prices at the time of the delivery, Rosneft said at the time. The 2 companies are also considering signing other long-term supply contracts and cooperating on other projects including petchems.

Rosneft expects its overall crude deliveries to China in 2018 to grow by 10 million mt to 50 million mt due to the contract with CEFC. The bulk of Rosneft's deliveries are made to CNPC under 2 long-term intergovernmental agreements, with the 1st supplies launched in 2010.