Specialists of Katalizator JSC exercised pilot-scale tests of catalyst for selective reduction of nitrogen oxides with ammonia under high temperatures.

Moscow, April 28 - Neftegaz.RU. Specialists of Katalizator JSC exercised pilot-scale tests of catalyst for selective reduction of nitrogen oxides with ammonia under high temperatures. The test results confirmed laboratory research and hereby open the opportunity for customers of Katalizator JSC to use this catalyst under working conditions of AK-72M unit, and to decrease their operation costs consequently.

The result of this research work confirmed the possibility of applying catalyst AOK-78-55 with saving of high resistance under high temperatures and load with the following cleaning levels: 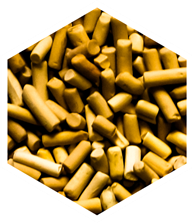 Based on the data from laboratory research of catalyst AOK-78-55 the pilot-scale test under conditions of real production area took place. The aim of this test was the measurement of exhaust gas purification efficiency and identification the possibility of applying this catalyst for industrial operation in AK-72M units.

The results of pilot-scale test in industrial reactor showed that level of gas purification from nitrogen oxides achieved 99.3 %. This result displays excellent effectiveness while maintaining standards of technological mode.

The important criteria for industrial applying of aluminum-vanadium catalysts is minimization of so called “vanadic corrosion” which is possible to appear with the presence of vanadium oxide in gas composition after reactor. According to our data entrainment of vanadium oxide from catalyst was with using of aluminum vanadium catalysts with inadequate actual abrasive resistance, the index of which is shown by some manufacturers as 22.7%. These catalysts lost their resistance and damaged during operating process.

But catalyst AOK-78-55 is produced according to totally another technology which allows achieving of extremely high resistance and thermal stability during industrial operating. During the process of AOK-78-55 catalyst engineering the specialists of Katalizator JSC initially put emphasis on high resistance and thermal stability together with saving of high catalytic activity.

It excludes entrainment of catalyst silt and risk of vanadic corrosion. Many years’ experience of applying catalyst AOK-75-88 in many industrial units UKL-7 confirms high consumer appeal of our product.

At the present moment the Department of Chemical Engineering, Katalizator JSC is ready on a timely basis to provide nitrogen industry enterprises with assistance in crossing over to the catalyst AOK-78-55 for selective reduction of nitrogen oxides, including all necessary investigations and calculations, and engineering support for catalyst operation.