Gazprom took note of the information about the projected investment program and the prospects of the LNG bunkering market.

Pursuant to the investment program for 2019, the overall amount of investments will stand at RUB 1,325.724 billion, with RUB 963.019 billion intended for capital investments, RUB 151.505 billion for the acquisition of non-current assets, and RUB 211.2 billion for long-term financial investments.

In line with Gazprom’s approved budget for 2019, the external financial borrowings will total RUB 297.761 billion. The approved financial plan will provide for a full coverage of the company’s liabilities without a deficit

It was noted that increased use of LNG as a bunker fuel was related to the restrictions imposed by the International Convention for the Prevention of Pollution from Ships (MARPOL). Starting from 2015, the maximum allowable concentration of sulfur in marine fuel was reduced from 1 % to 0.1 % in the designated Emission Control Areas (the Baltic and North Seas, the English Channel, North American coastal areas, and the U.S. area of the Caribbean).

In 2020, MARPOL will implement a global 0.5 % sulfur cap for marine fuel. This measure is expected to significantly decrease the use of fuel oil and increase the consumption of LNG as a fuel meeting all of the environmental requirements set by MARPOL. 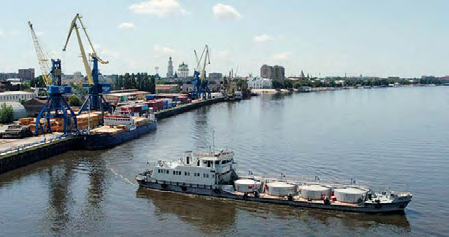 Gazprom continues to build the LNG production, storage and shipment complex near the Portovaya compressor station. It is planned to use the plant’s output to, inter alia, bunker marine vessels in Russia. The core process equipment of the complex is being assembled at the moment.

Meanwhile, construction of an onshore LNG storage tank and berthing facilities is underway. The complex is slated to come onstream in 2019. In addition, Gazprom is exploring the possibilities of building plants in the area of the Black Sea and in Russia’s Far East.

Gazpromneft Marine Bunker is currently working on a project for an LNG bunkering vessel. Today, only 4 vessels of this kind exist worldwide, along with 11 small-scale gas carriers some of which are fitted out for LNG bunkering.