The jatropha tree seeds contain oil that can be blended with conventional gasoline or diesel to make 'biodiesel'. 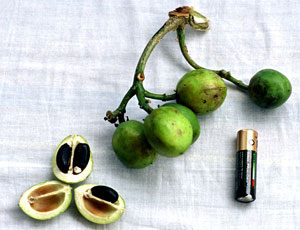 What some see as the biofuel of the future starts out as short, thick stems with a few leaves sticking out at sharp angles. But in just a few years, they will be tall, leafy trees with bright green spherical pods spilling their seeds all over the ground.

The jatropha tree doesn't have the name recognition or lobbying clout of corn-based ethanol, but the energy industry is increasingly spending development dollars and examining it as a potentially better biofuel source: It is easier to grow than corn, untied to the food market and free from any carbon dioxide or sulfur emissions.

Biodiesel from jatropha has powered test flights on Air New Zealand and Continental Airlines. It has prompted oil giant BP PLC to partner on jatropha projects in India and Africa.

And here on Florida's Gulf Coast, one jatropha company believes in the trees with such fervor that it calls them the eventual solution to the country's oil problems. But skeptics consider that hyperbole, saying there are still too many questions.

«Jatropha is a perfect crop," said Dave Wolfley, a distribution manager for Fort
Myers-based My Dream Fuel. „ We have the resources to do away with importing foreign oil.“

The numbers, Wolfley believes, are telling: The trees cost $6 to $7 each, can be grown 400 to an acre, and produce more than two gallons of oil apiece each season at maturity. Still, it would take a farm about the size of Rhode Island to produce a billion gallons — and the U.S. economy uses more than 50 billion gallons of diesel annually.

My Dream Fuel said it is in negotiations to sell trees to growers in the Big Cypress National Preserve, and environmentalist efforts to reduce cargo ship emissions could open up Florida's maritime market through the Port of Miami. Wolfley even runs his truck on jatropha.

But the company has had trouble convincing Florida growers of the viability and
profitability of its vision. Wolfley said even citrus farmers, who have lost much of their crop to disease and cold, aren't willing to take the risk on something new. Jatropha is a low-maintenance, fast-growing plant that doesn't require much watering, he said.

„ I thought it would be the easiest thing I've ever done," he said.

The resistance Wolfley faces reflects skepticism within the fuel industry and academia whether jatropha is the savior its growers claim.

Jennifer Holmgren, general manager of renewable energy and chemicals for energy technology firm UOP, which provided the fuel for the airlines' test flights, said jatropha may be the latest biofuel buzzword, but the energy industry must remain objective and look at multiple fuel sources.

It's important to find a fuel source that works with the current infrastructure, Holmgren said. For anything, including jatropha, to be widely used, it needs to work in the current pipeline system, which ethanol does not. And jatropha is only usable in diesel engines.

It will take some time for jatropha to hit the same price point as conventional diesel, UOP spokeswoman Susan Gross said.

Biofuel today usually costs about 80 percent for the feedstock and about 15 percent for refining, Gross said. Jatropha prices are currently high because of its low supply, but in two or three years with more farms growing it, it could reach the same cost as conventional diesel.

Jatropha shows promise, Holmgren said, but so do other biofuel sources such as algae.

„ It's not a bad feedstock," she said. «It's just that it's not the answer to all of our
prayers.“

So far, jatropha has grown mostly overseas in India and Africa. Sham Goyal, an agronomy scientist at the University of California, Davis, said the plant has «very good potential“ but that it would take at least five years to determine its commercial viability in the U.S., especially since jatropha can only grow in warmer climates.

Roy Beckford, who studies jatropha as a University of Florida researcher, said the plant can yield more oil than soy or corn. But because it is still essentially a wild plant, yields vary widely, making it an unpredictable commercial crop.

«Not all jatropha is going to perform the same," he said.

Teri Gevinson, owner of the Boca Raton real estate development firm Ascot Development, put 9,500 jatropha plants on parcels of Delray Beach land left vacant by pepper and tomato farmers who could no longer afford rent. She hopes to turn her newest venture, Ag-Oil, into a biofuel provider in six to nine months.

«I think we're going to give farmers a way to make money again," she said.