Vilnius, February 12 - Neftegaz.RU. Amber Grid reported that in the project of the gas interconnection Lithuania and Poland (GIPL), during the first 6 working weeks, the first kilometres of the gas pipeline have been welded.

1/10 of the gas pipeline lot to be constructed this year is planned to be welded in February.

2/3 or 100 km of the total gas pipeline route have already been marked, machinery and equipment needed for works have been efficiently mobilised. 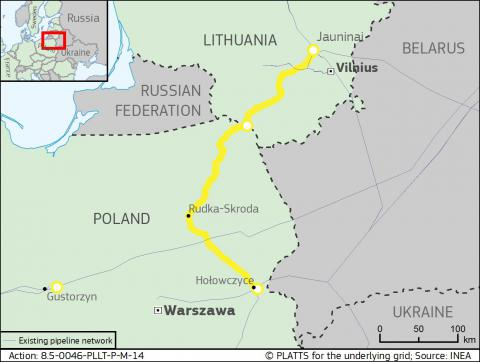 By the end of February, 24 more kilometres of steel pipes from Poland will reach Lithuania.
By the end of February, 29 km of steel pipes from a Polish manufacturer will be delivered to Lithuania.
In total, 45 km of pipelines will be transported from the start of construction to the storage sites until spring.
Other part of pipes will continue to be transported on schedule.

Preparations have been launched for complex horizontal directed drilling under the largest rivers of Lithuania - the Neris and the Nemunas - when laying gas pipeline sections under the rivers.
'We set an ambitious task for ourselves and contractors - to lay 100 km gas pipeline out of 165 km during the year 2020.
This project is important not only for Lithuania, therefore we have no time to waste, all our efforts are focused to ensure timely and quality construction of the interconnection', stated Acting CEO of Amber Grid Nemunas Biknius.
Gas will be transported via the new pipeline to Lithuania, Baltic States, Finland and Poland by the end of 2021.

In January-February, foreign manufacturers were ordered to manufacture the main technical elements of the gas pipeline: valves, control device activation-acceptance cameras and other materials of long manufacturing time needed for gas pipeline construction.
In the next weeks, transportation, welding and laying of pipes will continue, a part of the routes passing through the woods will be prepared, other building works will be carried out.

The first pipes for the GIPL gas pipeline construction were brought from Poland in early January.
They are stored in the specially installed grounds. Throughout the planned route of the gas pipeline, 10 grounds will be installed.
To ensure effectiveness and quality planning of works, pipes will be delivered closer to the physical location of works.
Pipes will be transported from the storage grounds and laid along the gas pipeline route.
Once the sections of the pipeline are welded, one meter and a half deep trench (deeper in certain areas) will be dug and the prepared pipe will be laid into it.
Nearly 2/3 of the pipeline are planned to be laid in 2020.

The gas interconnection to be completed in the end of 2021 will provide capacities enabling transportation of up to 27 terawatts hours (TWh) natural gas per year towards the Baltic States, up to 21 TWh per year towards Poland, while the Baltic gas markets will become a part of the common EU gas market.

224
Novatek and Nauticor to develop LNG bunkering in the Baltic

231
Russian companies to supply oil to Belarus without premiums