Iranian gas will be transported to Georgia via Armenia

Iran’s exports of natural gas to its northwestern neighbor, Armenia, will be tripled from its present one million cubic meters (mcm) to three mcm per day by the end of 2018 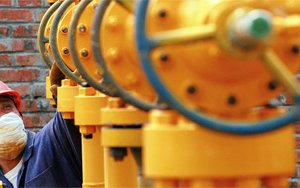 Iranian Tehran Times announced on July 27, 2016, that Iran’s exports of natural gas to its northwestern neighbor, Armenia, will be tripled from its present one million cubic meters (mcm) to three mcm per day by the end of 2018.

Telling reporters that transiting Iran's gas through Armenia was the meeting's main focus with Armenian Minister of Energy and Natural Resources Levon Yolyan, Iranian Oil Minister Bijan Zanganeh explained that an Armenian delegation made a trip to Iran following Tehran’s request for gas transit to Georgia through Armenian territories. They proposed formation of a new organization to be in charge of purchasing gas from Iran and since Iran accepted the suggestion, the current Armenian buyer of Iranian gas i.e. Yerevan Thermal Power Plant, will be replaced by the new body which is to be formed in future, he added.

«This year we signed a small contract with a customer from Georgia. We hope that before the end of the year we will start implementing it by conducting transit of gas through Armenia,» Zanganeh said. he added that Iran pursues the policy of strengthening energy ties with neighbors, especially in the sphere of gas exports; «while not a large consumer, Armenia is an important route for exports of Iranian gas.»

«After the elimination of the problems on the Russian pipeline, which will take about 40 days, our shipments will return to normal volumes - 1 million cubic meters per day. However, by the end of 2018 we plan, at the request of the Armenian side, to increase the volume of exports to 3 million cubic meters a day,» told Zanganeh the Iranian news agency IRNA.

Iranian oil minister further reiterated that «in exchange for each cubic meter of gas, Iran received 3 kilowatt hours of electricity from Armenia at the border, and the figure has now climbed to 3.2 kWh.»

Transportation and storage
163
163
Belarus to buy 1.21million tonnes of Russian oil in August