The Baltic Freeport of Ventspils in Latvia and 2 Ventspils-based terminals received an offer to store and transport pipes for the Nord Stream 2. 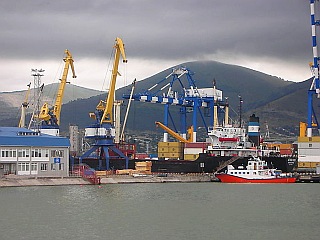 The Baltic Freeport of Ventspils in northwest Latvia and 2 Ventspils-based terminals on April 20, 2017, received an offer to store and transport pipes for the Nord Stream 2 gas pipeline project.

Ventspils city mayor Aivars Lembergs, who is also the port's board chairman, said during a news conference on Thursday that Latvia could earn $ 26.8 million by taking part in the project, which is intended to provide 2 new pipelines under the Baltic sea for pumping natural gas from Russia to Germany.

The Latvian government, however, is strictly against Latvia's involvement in the project, the Ventspils mayor said.

Nord Stream 2 has offered the port of Ventspils, as well as Eurohome Latvija and Noord Natie Ventspils Terminals, to store pipes and deliver them through the port for installation on the Baltic seabed.

To provide these services, the Latvian port would have to seriously expand its storage yard which currently is too small for storing the Nord Stream 2 pipes.

The Ventspils mayor said the project's managers had offered to provide 14 million euros for construction of additional storage space in the port.

Although Ventspils mayor Lembergs believes Latvia should accept the lucrative deal, he admitted that the government was unlikely to back his position.

Latvian Economics Minister Arvils Aseradens responded to the news by saying that the involvement of Latvia or Venstpils in the Nord Stream 2 gas pipeline project could not be supported by any means.

The minister indicated that the Latvian government had already decided against any involvement in the project and that he had given explicit instructions to his representative on the Ventspils port board not to support any kind of involvement in Nord Stream 2, which the Baltic states regard as a geopolitical project contradicting the plan to create the European Energy Union and lessen Europe's overreliance on Russia gas.

The European Commission is currently looking into the Nord Stream 2 project's compliance with EU laws as there are concerns that the new pipeline would concentrate 80 % of the EU's gas import from Russia in a single route.

Advertising at neftegaz.ru
Latest news
petrochemistry
137
137
Scheduled overhaul of the TANECO complex installations
Companies
90
90
The temporary TGE gas station will be replaced with a permanent one in the coming months
Nuclear power
133
133
Rosatom: The 2nd stage of the lead universal nuclear icebreaker Arktika sea trials is completed
Conferences&Exhibitions
95
95
Big Data Analytics In Oil & Gas Industry: Interview with Ahmed Khamassi, Former VP of Data Science of Equinor
Transportation and storage
149
149
Ukraine to get about $2 billion for gas transit from Russia