Gazprom is looking at the possibility of connecting the Turkish Stream gas pipeline via the territories of Bulgaria, Serbia and Hungary. 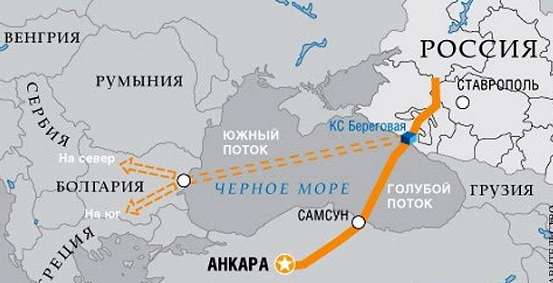 Gazprom is looking at the possibility of connecting the Turkish Stream gas pipeline it is building to the Baumgarten hub near Vienna, Austria via the territories of Bulgaria, Serbia and Hungary, according to media reports on November 27, 2017.

Russia's NIIgazekonomika will conduct a pre-investment study of scenarios to transport gas from Turkish Stream on to European countries, interfaxenergy quoted Gazprom as saying.

The purpose of the study is to choose the optimal configuration for creating new, and expand existing gas transportation capacity to Serbia, Bulgaria, Hungary and Austria.

Both Serbia and Bulgaria are heavily dependent on Russian gas supplies. Bulgaria imports almost all the gas it needs via a single pipeline crossing Ukraine and Romania.

Serbia too has just 1 gas supply route - from Russia via Ukraine and Hungary.

Gazprom, which is building the Turkish Stream gas pipeline, said last week that over 520 km of pipes have already been laid along the 2 strings of the route. Works are already underway in Turkey’s economic zone.

The 1st and 2nd strings of Turkish Stream will have a throughput capacity of 15.75 billion cu m each.

Turkish Stream’s offshore section will run over 900 kilometers from the Russkaya compressor station near Anapa across the Black Sea to the Turkish coast, with an onshore string for gas transit to be laid up to Turkey’s land border with neighbouring countries.