Construction of the southern section of the European Gas Pipeline Link (EUGAL) in Saxony can begin.

Chemnitz, October 1 - Neftegaz.RU. Construction of the southern section of the European Gas Pipeline Link (EUGAL) in Saxony can begin.

Gascade Gastransport, the operator of the project for the construction of the gas pipeline EUGAL, reported on September 28, 2018. 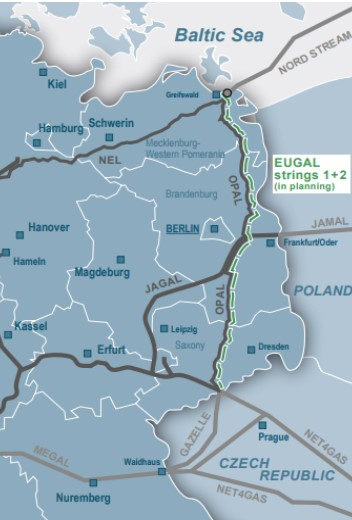 27 September 2018, the Chemnitz office of the state authorities in Saxony announced its planning approval decision to the project developer GASCADE Gastransport GmbH.

As a result, all of the individual approvals needed to construct the southern section of the EUGAL in Saxony with the natural gas export station in Deutschneudorf have now been given.

The section will run from Reinsberg (Mittelsachsen district) in a southerly direction as far as Deutschneudorf (Erzgebirgskreis district) on the German/Czech border.

Construction of the 54-kilometer southern section in Saxony will begin in the current week.

The necessary preparatory work will be carried out first: construction sites will be set up along the planned route and steps will be taken to protect traffic on the adjacent roads.

Work to strip the topsoil will then begin.

All owners and leaseholders whose plots of land are affected will be notified once again before work starts.

Laying the entire section of the EUGAL in Saxony including the natural gas export station is expected to take until the end of 2019.

GASCADE regards pipeline projects such as the EUGAL as a community matter.

“Before the official participation procedure for the EUGAL began, we involved the districts and local residents in the planning so that they could provide important suggestions and information,” said Hümbs.

EUGAL is a natural gas pipeline that will extend over a length of some 480 kilometers from the Baltic Sea through Mecklenburg-Western Pomerania and Brandenburg via southern Saxony to the border with the Czech Republic and will largely comprise two parallel strings.

A natural gas export station with a gas pressure regulating and metering station is also planned in Deutschneudorf.

With the construction of the EUGAL, GASCADE is responding to the growing demand for natural gas and transport capacity in Europe.

106
Oil transit to Europe unaffected by pipeline repairs in Belarus

191
Gazprom to continue supplying gas to Armenia on same terms in 2020
Advertising at neftegaz.ru