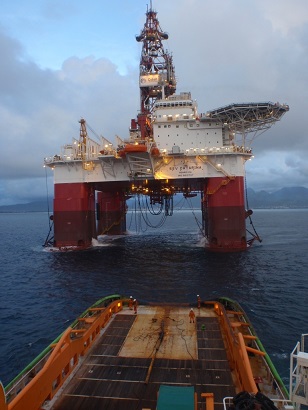 Fairmount Summit delivered rig SSV Catarina offshore Angola. Tug Fairmount Summit has delivered rig SSV Catarina offshore Angola. The rig has been towed from Okpo, South Korea, via Strait of Malacca and Cape of Good Hope towards Angola.SSV Catarina is a brand new sixth generation semi-submersible drilling rig for ultra deepwater operations. The rig is constructed by Daewoo Shipbuilding & Marine Engineering in South Korea. SSV Catarina is designed to drill up to depths of 10,000 meters. The rig has a length of 118 meters and a width of 78 meters.

When hooked-up with the SSV Catarina the tow sailed via Malacca Strait en Cape of Good Hope towards the Angola, where it arrived after covering a distance of over 10,000 miles with an average towing speed of 6.9 knots. 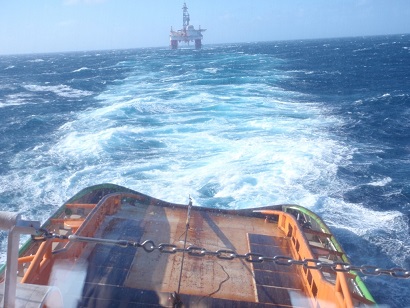 During the voyage bunker stops were made in Singapore and Mauritius. At Mauritius the Fairmount Summit performed a cargo run between the port and the SSV Catarina.
Fairmount Marine is a marine contractor for ocean towage and heavy lift transportation, headquartered in Rotterdam, the Netherlands. Fairmount’s fleet of tugs consists of five modern super tugs of 205 tons bollard pull each, especially designed for long distance towing, and a multipurpose support vessel. Fairmount Marine is part of Louis Dreyfus Armateurs Group.