ExxonMobil made 10th discovery offshore Guyana and increased its estimate of the discovered recoverable resource for the Stabroek Block to more than 5 billion oil-equivalent barrels.

Georgetown, December 4 - Neftegaz.RU. ExxonMobil made 10th discovery offshore Guyana and increased its estimate of the discovered recoverable resource for the Stabroek Block to more than 5 billion oil-equivalent barrels.

ExxonMobil reported this on December 3, 2018.

The resource estimate, up from the previous estimate of more than 4 billion oil-equivalent barrels, is a result of further evaluation of previous discoveries and includes a new discovery at the Pluma-1 well.

“The discovery of a resource base of more than 5 billion oil-equivalent barrels in less than four years is a testament of our technical expertise and rigorous evaluation and pursuit of high-potential, high-risk opportunities in this frontier area,” said Neil Chapman, ExxonMobil senior vice president.

“We will continue to apply what we’ve learned to identify additional exploration prospects and potential future discoveries that will deliver significant value to Guyanese people, our partners and shareholders.”

The well is located approximately 17 miles (27 kilometers) south of the Turbot-1 well.

The Noble Tom Madden will next drill the Tilapia-1 prospect located 3.4 miles (5.5 kilometers) west of the Longtail-1 well.

“Together with the government and people of Guyana, we are continuing to grow the value of the Stabroek Block for Guyana, our partners and ExxonMobil with successful exploration investments,” said Steve Greenlee, president of ExxonMobil Exploration Company.

“Our ongoing work will evaluate development options in the southeastern portion of the block, potentially combining Pluma with prior Turbot and Longtail discoveries into a major new development area.”

The Liza Phase 1 development is expected to begin producing up to 120,000 barrels oil per day by early 2020, utilizing the Liza Destiny floating storage, production and offloading vessel (FPSO).

As previously announced, Liza Phase 2 is expected to start up by mid-2022.

Pending government and regulatory approvals, Liza Phase 2 project sanction is expected in early 2019 and will use a second FPSO designed to produce up to 220,000 barrels per day.

Sanctioning of a third development, Payara, is also expected in 2019 with start up as early as 2023. 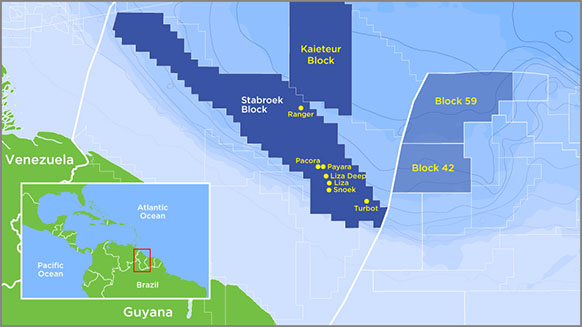