Total has made a significant gas condensate discovery on the Brulpadda prospects, located on Block 11B/12B in the Outeniqua Basin, 175 kilometers off the southern coast of South Africa.

Paris, February 7 - Neftegaz.RU. Total has made a significant gas condensate discovery on the Brulpadda prospects, located on Block 11B/12B in the Outeniqua Basin, 175 kilometers off the southern coast of South Africa.

Following the success of the main objective, the well was deepened to a final depth of 3,633 meters and has also been successful in the Brulpadda-deep prospect.

“We are very pleased to announce the Brulpadda discovery which was drilled in a challenging Deepwater environment”, said Kevin McLachlan, Senior Vice President Exploration at Total.

“With this discovery, Total has opened a new world-class gas and oil play and is well positioned to test several follow-on prospects on the same block.”

Total drilled this exploration well with the latest generation drilling ship and was able to leverage its experience in similar environments, such as the West of Shetland, UK. 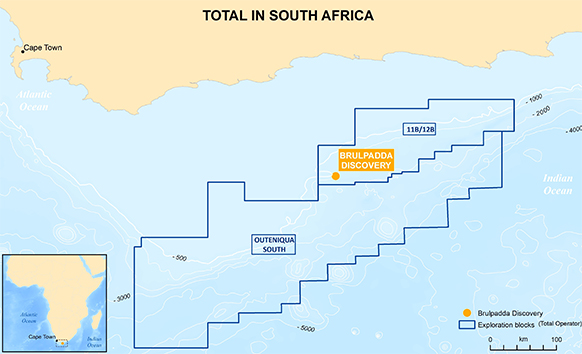 Following the success of Brulpadda and confirmation of the play potential, Total and its partners plan to acquire 3D seismic this year, followed by up to four exploration wells on this license.

Total has been present in South Africa since 1954.

Upstream, Total has developed oil and gas exploration activities in the Outeniqua basin with operating interests in two blocks, 11B /12B and South Outeniqua.

Downstream, Total, which is ranked in the top four petroleum products market companies in South Africa, operates about 550 service stations throughout the country and is present in all other business segments (lubricants, B2B, aviation, LPG, other specialties).

It also has interest in the Natref refinery in Sasolburg.

Through our SunPower affiliate, Total has also been developing solar projects and locally producing photovoltaic panels.

Since 2016, its Prieska solar power plant (installed capacity of 75 megawatt-peak), located in the Northern Cape, has been supplying electricity to the equivalent of 70,000 households.

Off-shore drilling
503
503
Zarubezhneft and its partners shall commence the development of the Block 09-2/09 offshore Vietnam
Advertising at neftegaz.ru