The power system of South America has been recently being in the limelight. The events of the end of 2007 and the beginning of 2008 indicate that Brazil can join the global biggest oil exporters in the near future. Brazil can become the oil supplier for the USA, reducing the dependence of the latter from Venezuela, the experts say.

Skyscrapers and old-time Spanish and Portuguese-style mansions along with picturesque huts of fishermen and artisans scattered ashore; the Iguazú falls, carnivals, surfing, capoeira, football, sun, beach, famed Rio de Janeiro: this is Brazil from the tourists point of view. Impenetrable jungle, wicked climate (rainy season followed by droughts in the north, temperature difference, resulting sometimes in zero temperature in the south – editor’s note), poisonous flora and dangerous fauna, deep accumulations of hydrocarbons – this is Brazil for industrialists.
Until recently Brazil has never been regarded as a more or less big oil and gas exporter. Moreover, this South American country even couldn’t provide itself with oil and gas for a long time so it was the oil and gas importer. The major part of Brazilian oil is heavy and lies deep, what makes its production and refining difficult. During many years geologists have been proving that there are some vast hydrocarbon deposits in the country and that the Amazonian forests are the new oil and gas El Dorado. Because of the difficulties concerned with the exploration works, the researches practically haven’t been carried out.
The oil Brazilian company Petrobas got its own way, having decided to invest in offshore geological researches. Thus at the end of 2007 all the world learned about newly found deposits of light crude and natural gas in Brazil. The president of the country Luiz Inácio Lula da Silva expressed the hope that Brazil from the moment of launching of the new oilfields could become an oil exporter. The new oilfield will allow Brazil to reach the oil production volumes comparable with Venezuela and Saudi Arabia. Its potential estimated reserves come to 40% of all oil ever found in Brazil.
The Brazil’s presidential chief of staff Dilma Rousseff declared: “Having received its own huge source of the light crude oil, Brazil goes into the rank of the great oil powers along with Venezuela and Arabic countries.”
However that isn’t the only achievement of the Brazilian oil industry. As late as in 2007 the country put 6 into operation new oil platforms. According to the plans for the next year, three more oil platforms and one gas platform will be launched offshore the Atlantic coast. However, skeptics claim it is too early to talk about export. And the discovered reserves will satisfy just the domestic demand. To become an exporter, Brazil has to find light crude oil in the Amazon basin…


,During the last decades the petrochemical industry of Brazil experienced rapid growth. The total output of the three most famous petrochemical complexes of Brazil, located in Bahia states (North-East), Rio Grande do Sul (South) and Sao Paulo (South-East) is more than 1.4 million tons a year. A large oilfield Bacia de Campos in Rio de Janeiro state, which estimated value makes up 1.3 billion barrels of oil and Bacia de Santos of 700 million barrels of oil satisfy more than a half of the country’s demand.
If the active geological prospecting is continued offshore and in the Amazon basin, there is a chance to find large deposits of hydrocarbons. Taking into account the latest discoveries, Brazil plans to increase hydrocarbon reserves by more than 50 % and to enter the first ten of world leaders of oil and gas reserves. At the moment the total reserves of the Brazil’s state oil company Petrobras are estimated at 13 billion barrels of oil.
After the discovery of the new oilfields the company shares soared by 14.2%.
But Brazil is ready to make advances to foreign companies. Following the news about the new oilfields, the world’s largest energy companies decided to enter the Brazilian market. At the moment the government of Brazil seems to be interested in the USA. And it can be easily understood as the USA is interested in finding the alternative for Venezuela’s crude oil. Furthermore, entering this game, Brazil could get extra benefit, especially because the key Brazil industries either belong to the USA companies or depend on them.

If the Americans find new oilfields and win the exploration tender, the USA will get a new oil supply channel. All that will affect the economy of Venezuela and… the Russia’s influence in this region. It is Venezuela, where our country actively operates now. According to the analysts, we have to stir up our activities on the Brazil’s market, find the instruments of influence and increase economic and energy presence in this country. 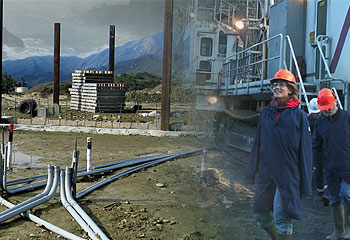 However at the end of 2007 Brazil’s state oil company Petroleo Brasileiro announced a discovery of a gas field nearby Rio de Janeiro. According to the company’s data this discovery can be compared with the discovered in 2007 huge Tupi oilfield of 5-8 billion barrels estimated reserves. The gas lies 37 km to the west of Tupi at a depth of 5,1 km. The area of the field, named Jupiter, makes up 1290 square kilometers; however, it is too early to talk about its reserves.
It will take about 2 years to examine the gas field, and if the commercial practicability of production is confirmed, they will start developing the field, but not earlier than in 2014. Guilherme Estrella, the production manager of Petrobras, considers that Brazil thanks to this newly found field will be able to abandon gas importing from the other countries. But for the absolute energy independence and economically effective gas supply system Brazil needs a modern pipeline system.
In this case Brazil is likely to collaborate with Venezuela in the frameworks of the ALBA trade union – Bolivarian alternative for both Americas. Let’s note that this union consists of Venezuela, Cuba, Nicaragua and Bolivia. The Hugo Chavez’s proposal to establish TransAmerican pipeline seems economically attractive to Brazil. In point of fact, this project will become a Latin-American version of OPEC.

It is the most acceptable variant for Russia and its power system, especially since Gazprom has all the chances to become the one of the leading contractors of TransAmerican pipeline construction, which will link Brazil, Argentina and Venezuela. In this case our country will be able to get the access to the natural gas market of Brazil. The main thing is not to lose the chance.