The authorities want to upgrade domestic & export infrastructure to make the country a major gas supplier.

Turkmenistan holds the world's 4rth-largest natural gas reserves, but most of them remain undeveloped. The authorities now want to upgrade domestic and export infrastructure to make the country a major gas supplier. But a reluctance to open Turkmenistan up to foreign investment could restrain expansion plans.

The Turkmen leadership has so far declined to follow the example of countries like Azerbaijan in signing major production-sharing agreements (PSA), allowing the energy majors to invest in the upstream. The country produces around 70bn m3/yr of gas and 260,000 bl/d of oil.

Turkmenistan's most important gasfields include Galkynysh, with over 24tr m3 of gas in place, along with Yashlar-Minara and Bagtyarlik, holding 1.45-5tr m3 and 1.3tr m3, respectively. The government has signed concessions and service contracts, rather than PSAs, to develop these giant fields with Petrofac, LG International, CNPC and Hyundai for a specific timeframe. The Turkmen authorities show no sign of opting for PSAs to attract more international firms.

But the upstream is only one part of Turkmenistan's energy sector. The midstream is also being marked out for special attention. President Gurbanguly Berdymukhamedov, addressing an energy conference in 2018, outlined his strategy.

«Our aim,» he said, «is to form routes for exporting energy resources through diversification and the creation of multi-vector pipeline systems.» Turkmenistan, he continued, would seek to implement «large-scale projects» to build «major energy bridges» to both the east and west. The aim of the Ashgabat authorities is to increase gas production rates and expand volumes of refined hydrocarbons, thus boosting exports of oil and gas.

The benefits will also be felt directly by the people of Turkmenistan. Berdymukhamedov says «the new projects in the oil & gas industry will contribute to an integrated industrialisation of Turkmenistan's regions and the dynamic development of the national economy».

Ambitious pipeline project
China is the main customer for Turkmen gas, receiving 30-40bn m3 /yr through the Central Asia-China pipeline. A large part of the revenue from sales to China is used to pay off the debt for the construction of the pipeline, which passes through Uzbekistan and Kazakhstan, and was financed by China.

Aside from this export route, the Turkmen leadership is hoping for the swift realisation of the planned 1,100-mile (1,800km) Turkmenistan-Afghanistan-Pakistan-India (TAPI) gas pipeline.

Proponents of this $10bn project say it would carry significant benefits for all the partners involved. Turkmenistan, which has already completed most of the work on its own section (127 miles) would find eager markets in Afghanistan, Pakistan and India, with the gas delivered via newly-built infrastructure.

For Afghanistan, TAPI gas would contribute to the economic restoration and the general stabilisation the country. Apart from gas, Afghanistan would also receive significant transit fees. The same goes for Pakistan, the longest section of the pipeline, where major investment would be needed. The main sponsor of TAPI is the Asian Development Bank. Given the security difficulties in Afghanistan, along with financing and logistical challenges, it is not clear when a final investment decision might be taken.

Russian market
Another major development has been the resumption of Turkmen gas sales to Russia. Alexey Miller, CEO of Gazprom, visited Turkmenistan in October 2018 and held talks with Berdymukhamedov. The 2 men agreed that Gazprom would resume imports of gas from Turkmenistan as of January 2019. 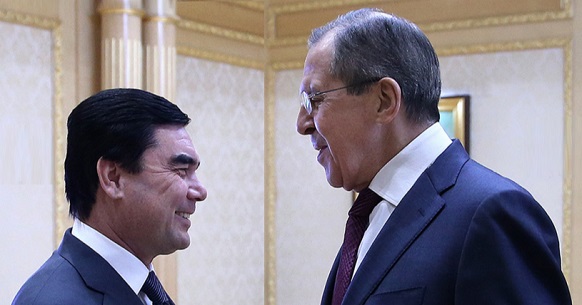 A more distant gas export option for Turkmenistan would be the Southern Gas Corridor (SGC). However, for that to happen, several prerequisites are necessary. Firstly, there would have to be a significant increase in gas production to meet the required volumes for the SGC.

Secondly, construction of the Trans-Caspian offshore pipeline would need to go ahead-this may now be realistic, following the August 2018 Aqtau agreement on the legal status of the Caspian Sea and the lifting of the Russian objections. Thirdly, Azerbaijan would need to agree that the Turkmen volumes of gas would be processed at the Turkmenbashi facility and not in Sangachal, in Baku.