To boldly go to the Barents 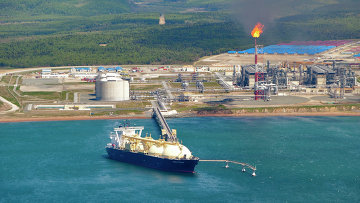 A popular Russian saying goes, "He who does not take risks does not get to drink champagne." In the case of the Shtokman gas field, the saying may be amended to, "He who does not take risks does not stand to make a fortune at the world's biggest natural gas reservoir."
Shtokman's fate may be decided at the St. Petersburg Economic Forum, which kicks off later this month. The list of shareholders, which as of now includes Gazprom, Total and Statoil, could be extended. Shell, which has extensive experience in liquefied natural gas, is now considered a possible partner for the development deal, and Gazprom has finally decided that the field, which is located in the Barents Sea and contains 3.7 trillion cubic meters of natural gas, will be used for the manufacturing of LNG.
This decision may elevate development costs, but will help project participants to diversify their strategies by addressing Asian markets, which are impossible to reach by a pipeline. Industry experts say that Gazprom needs to hurry, though, as the competition may catch up.
"Chances are, a long-awaited investment decision on Shtokman will be taken during the St. Petersburg forum," IFD Kapital analyst Vitaly Kryukov told The Moscow News. "The project faces difficulties, despite the LNG market's rapid growth, as key competitors' projects are in a more advanced stage now."

Kryukov said that the United States plans to begin exporting LNG at about the same time as Gazprom plans to launch Shtokman, while Australia has been boosting its LNG capacity. The cost of a cubic meter may finally decide who will win on the market.
"Shell is likely to join Shtokman at the expense of foreign partners' share, but it's still unclear how big its role may be, and maybe someone else will join," Kryukov said.
Alexander Pasechnik, head of analysis at the National Energy Security Foundation, said that international majors were in the process of bargaining with Gazprom and Russia over promised privileges to build a highly efficient LNG venture. Pasechnik said that the situation had changed as some new opportunities emerged. A so-called "gray zone," a disputed 60,000-square-kilometer sea area between Russia and Norway, is more open for Norway's Statoil now.
"Russia has signed a borders delimitation agreement [in September 2010], which widened opportunities for Norway to exploit the area," Pasechnik said. Given that, Statoil may be busy looking for more deposits there.
On May 25, President Vladimir Putin met Statoil Group CEO Helge Lund to convince the company to not abandon the Shtokman project.
"Assurances were made [to Statoil] at that meeting that shareholders of the Shtokman project would be granted all that [the privileges] that they had been previously promised," Pasechnik said.
"I don't really see any commercial problems for the Shtokman project, only technical," Renaissance Capital analyst Mikhail Rotayev told The Moscow News. "Cooperation with Statoil isn't the only way forward, but it pays to choose right when picking partners."

Rotayev noted that Shtokman, as a conventional natural gas resource field, is very difficult to develop, but that it is ultimately more promising than any alternative, like shale, bitumen and other types of gas field.
"It takes a lot of money to drill on the Arctic shelf, but you'll get 10 times more gas from the well," he said. "From this standpoint it's unbeatable."
It is still unclear how exactly the LNG will be then transported to lucrative Asian markets. This is what impedes building a coherent business model, as extreme weather conditions make export tricky. Rotayev said he supported the idea that the route to Asia should go along the Norwegian coast towards the Atlantic and then, bypassing Africa, to India and Southeast Asia. In this scenario, icebreakers will be needed only to pave the way from the Barents to the Atlantic.
There is another plan, which says that the LNG from Shtokman should go the opposite way, by the so-called Northern Sea Route along the Russian Arctic coast.
"This route for the Shtokman LNG will result in 10 percent savings, as there will be no need to pass through the Suez Canal," Olga Bakhtina, director of the Neftegaz. ru analytical agency, said. "Atomf lot [the fleet of atomic icebreakers under Rosatom, the state nuclear energy company] is fully capable of handling this task."

Bakhtina also pointed out that such a route will increase activity along the entire Arctic coast of Russia. In Russia, different engineering bureaus are working on a new generation of LNG super-tankers, which will include icebreaking capabilities.
The fact that the LNG might ultimately travel via both routes, depending on destination, also seems logical. The logistics of transporting the gas are part of a long list of risks, which include environmental concerns. Vast resources must be invested to build both a competitive and safe business at the Shtokman gas field - this much is clear.
Analysts say that project participants understand that extra investment is needed, and will rather see erosion of their share, which will allow decreasing the risks per shareholder.
"Shell is likely to join Shtokman, probably by decreasing Total's stake," said IFD Kapital's Kryukov. "It's still unclear by how much, and maybe another company will join."
"Despite the uncertainty, the project has good prospects for Gazprom, as it will produce a synergistic effect on the entire gas industry in Russia," Neftegaz.ru's Bakhtina said.