Greece in negotiations to extend Turkish Stream to Europe, through «Europe Stream»

It is up to Greece to convince the EU, that extending the TurkStream across Greece is in European interests.

The ambitious TurkStream gas pipelines pose the potential to convert Turkey into a strategic European gas hub, through which Russian gas will eventually be transported into Turkey through a 1st leg, and onwards into Southern and Southeastern Europe in a latter phase. Leveraging on its ever-growing energy strategy, along with its multifaceted foreign policy approach, Greece is playing its cards to become the point of entry for TurkStream’s 2nd leg into the EU.

The TurkStream gas pipeline will transport natural gas from Russia into Turkey by the end of 2019, through its first line, and onward from Turkey into Southern and Southeastern Europe, through an expected second leg. However, it remains unclear whether the European connection will be completed through Bulgaria or via Greece – an objective that Greek PM Alexis Tsipras has set out to achieve, following his official visit to Moscow in December. Each of TurkStream’s 2 pipelines will be 939 km long, with the 1st pipeline – connecting Russia and Turkey via the Black Sea – having entered its final stage, according to the announcement made by Gazprom in November last year. With expectations set for the 1st leg of TurkStream to meet up to 35 % of Turkey’s gas consumption; upon completion, each pipeline will have a capacity of 15.75 billion m3 (bcm) per annum.

TurkStream was initially envisioned as part of the now-shuttered South Stream project, which was meant to transport natural gas from Russia into Bulgaria, Serbia, and Hungary, via the Black Sea. However, the project was met with controversy due to its alleged non-compliance with EU legislation, especially with respect to the Third/news/view/172918-Prime-Ministers-issue-statement-of-support-for-Greece-Bulgaria-gas-interconnector Energy Package – legislation concerning the European gas and electricity market – according to which, companies must separate sales operations from transmission networks. Gazprom’s reluctance to comply in this regard, along with European sanctions that followed the 2014 Crimean crisis, resulted in Russia cancelling the South Stream project in December 2014. The TurkStream pipeline is something of its inheritor, and Greece is keen on becoming the gateway for its gas into Europe.

With Tsipras having initiated negotiations with the EU on the matter, Greece is determined to make it work, and hopes to rely on its traditionally warm ties with Russia to see it through. The Greek PM met with Vladimir Putin in December, to discuss matters relating to energy, investment, and increased exports to Russia. Tsipras took the opportunity to stress that Russia cannot be left out of the EU’s security architecture, in what was seen as an attempt to boost ties between the EU and Russia, particularly within the scope of the energy sector. 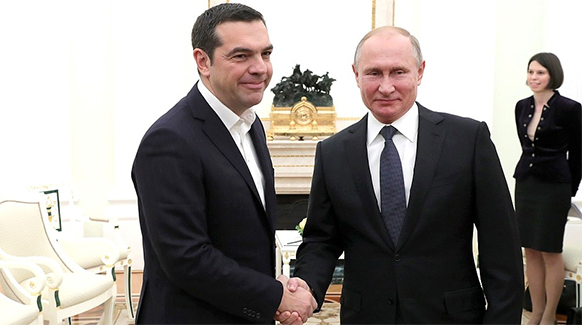 In an interview with Russia-24 and TASS, Tsipras described his hopes for a future energy partnership with Russia, saying that «Greece and other European countries should seek a cooperation with the Russia for the transfer of Russian gas toward Europe, via Turkish Stream,» also proposing that the pipeline be named Europe Stream.

«We are negotiating [it] in the EU,» Tsipras was quoted as saying by TASS. «I believe that our arguments are strong. We have persistence and patience, and I believe that possibly we will have positive results in the future.»

Centre for Strategic and International Studies Senior Fellow, Nikos Tsafos, argued in an article that the pipeline could be good for European-Russian relations overall. «For a continent bitterly, and often needlessly divided by pipelines, TurkStream offers an opportunity to depoliticise gas, and show that new infrastructure can be a win-win for Russia and Europe.» While it would not alter Russia’s foreign policies, Tsafos posits that TurkStream «can enhance liquidity and competition in Southeast Europe, just like Nord Stream 1 did in Central Europe. It can improve supply security, allowing countries like Romania and Ukraine access to additional supply sources.»

He also added that TurkStream could lessen the need for new infrastructure, «as long as the existing infrastructure is used better – which will only happen with strong regulatory oversight, allowing access to infrastructure, and enabling virtual trades that shrink price gaps between countries.»

However, with an expected 49 bcm of gas destined for European markets – out of a total of 63 bcm that would be delivered to Turkey – the volume of gas would outweigh the existing pipeline capacity at the Greek-Turkish border. Consequently, the viability of Greece’s bid will depend on increasing pipeline capacity at the border, as well as from Greece to Italy, and into the rest of Europe. There are also concerns that the volume of Russian gas could exceed the demands of European customers.

It is up to Greece to convince the EU, that extending the TurkStream across Greece, and to other EU countries, is in European interests. Tsipras sees this as part of their multi-faceted energy policy, especially in the light of Greece’s evolving strategic relationship with Turkey. Tsipras hopes the EU will see the benefits of backing his plan, despite the fact that cooperation with the Russia is limited, due to Greece’s status as an EU and NATO member. «We value the fact that Russia is an important partner in the energy sector, as it has rich energy sources,» Tsipras said.

Volkan Özdemir, head of the Ankara-based Institute for Energy Markets and Policies, in an interview with Anadolu Agency, said that «Russians in response to this are focusing on the Bulgarian option, and not on Greece. Therefore, in this sense, I think that a political preference will be made by the Russians.»

Things are far from settled. Even with the 2nd leg of TurkStream up in the air, follow-on projects to bring Russian gas into Europe include the potential Tesla pipeline – that would run from Greece to FYROM, Serbia, and Hungary, ending at the Baumgarten gas hub in Austria. And the proposed Eastring – which would transport gas north, via Bulgaria to Romania and Hungary.

Since the meeting between Tsipras and Putin, no additional statements have been made by Greece or Russia about the European port of call for Gazprom’s TurkStream. Nonetheless, much relies on the EU’s decision on the matter, as Germany, France, and Austria, have backed the TurkStream project overall, without weighing in on a preference for Greece or Bulgaria. Ultimately, the EU’s final decision will carry weight beyond the ongoing bilateral talks between the countries in question, and will determine whether Greece’s ambition to be the entry point for Russian gas into Southern and Southeastern Europe will become a reality.