Roads is the best Asset

The Khanty-Mansi Autonomous Region (KhMAR) occupies a key position for the prosperity and energy needs of the Russian economy. The area enjoys a transport network that has sustained a high quality of life for individuals as well as let industry grow substantially.

The Khanty-Mansi Autonomous Region (KhMAR) occupies a key position for the prosperity and energy needs of the Russian economy. The Region is the largest producer of oil in Russia, the second largest generator of electricity, and the third largest for gas extraction. To a large degree the development of the Khanty-Mansi Region determines the development of the oil and gas industry in the whole of the Russian Federation. The area enjoys a transport network that has sustained a high quality of life for individuals as well as let industry grow substantially. The majority of cargo is transported by rail or water, with an extra one third traveling by road and about a third by air. Unfortunately, due to the climate the ability to send cargo by water depends on the time of the year and also on the channels available. The railway network is constrained due to a state monopoly eradicating competition, and compounding this air transport is limited to the number of aircraft, and due to high costs. The constraints on the different forms of transport have meant that the local government has put a great deal of emphasis on the development of a road network, indeed Governor A.V.Filippenko counts such a strategy as vital to the regions future.

,Main motorways are provided for freight traffic within the district and also connect KhMAR with the other regions of Russia. Total highway coverage is measured at 9,600 km, of this 5,500 km are constructed with asphalt. The region has centrally funded roads totaling 500 km and locally funded roads total 9,100 km. Please note that these figures are not exact.

,1. The Latitudinal corridor Tomsk - Khanty-Mansiysk - Perm (1), is continuation of a northwest transport corridor. It connects industrial Ural with meridian transportation authorities, simultaneously promoting economic development of territories.
2. The motorway Surgut - Nizhnevartovsk (1.1), has reduced the round-the-clock journeys between Eastern cities of the district. It is a part of the latitudinal corridor Tomsk - Khanty-Mansiysk - Perm (1)
3. The newly launched stretch of road of Nizhnevartovsk - border of Tomsk area (1.2) allows transit into the next area and further to Eastern Siberia.
4. Meridian transport corridor Tobolsk - Kogalym (2) is a part of a corridor Tyumen - Surgut - New Urengoy - Nadym - Salekhard. Most of this road is federally owned.
5. The bridge through the river Ob in Surgut area (3) provides all-season automobile connection between three parts of the Russian Federation: Yamal-Nenezki, Khanty-Mansi Autonomous Region and the south of the Tyumen area.
6. The Bridge through Irtysh in area of Khanty-Mansiysk (4). Necessity for construction of the given bridge arose due to the construction of the latitudinal transport corridor Tomsk - Khanty-Mansiysk - Perm (1). It also will enable to connect one and a half thousand kilometers, to connect the western part of district through Nyagan, an exit to Ivdel, Sverdlovsk area and to Perm. 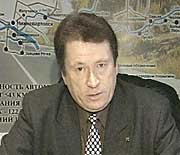 In September of 2000, a whole year before planned, an important road bridge was completed over the River Ob in the Surgut area. The bridge, primarily sourced from the regional government road fund, took five years to complete. The project financing was unconventional for Russia because the Governor allowed the completion date for the project to be brought forward. The Khanty-Mansi Government allocated two billion Roubles for the project.
Nizhnevartovsk area. In 2001 more than 300 million roubles from the district road monetary fund and 130 million roubles from means of the local budget were allocated to the construction and repair of roads in the area. This year there were allocated 120 million Roubles.The Nizhnevartovsk calls for tenders for construction work
Similar bridges have not been constructed in the whole country for over twenty years, so the Khanty-Mansi region has once again set a great example to the rest of Russia. The bridge is a very special piece of engineering a bit like a flying structure of more than half a kilometer in length. The importance of the flyover in terms of the infrastructure of the country lies in the fact it provides a link between two huge areas of importance Khanty-Mansi and and Yamal-Nenetsky districts with the basic road corridors of the Russian Federation Perm - Serov - Khanty-Mansi - Surgut - Nizhnevartovsk - Tomsk; Tyumen - Surgut - New Urengoy - Nadym - Salekhard. The architect of the magicil bridge is from the scientific institute "Giprotransmost", it was constructed by "Motostroy-11".
On September 28th 2001, the regional Governor of Khanty-Mansiysk announced that the next large infrastructure project will be the building of a road bridge in the town of Irtysh.

Important tasks in the future for the KhMAO Road Department are to; build new highways and ensure that existing roads are up-kept; develop a network that is suitable to the KhMAR region; expand the motorway network; improve road safety. On top of this the government needs to fit the network to existing and future trade flows, as well as integrating networks with those of the neighboring regions
Problems of financing are solved in some cases by re-structuring duties. For example, the enterprise "Tyumentransgas" which has ran into debt under taxes in the budget and Road fund. Debts are in amount of 24 million roubles, the sum of duties and fines to be paid to Road fund exceeds 750 million roubles. The part of monetary resources is allocated to construction of the bridge through the river Irtysh in area of Khanty-Mansi. The first vice-president of the government of autonomous region Oleg Chemezov and general director "Tyumentransgas " Pavel Zavalny have signed about it the report, which was ratified by the governor.
With regard to the impact of global growth on the region it is important to talk of the prolongation of a transport corridor from London through Paris, Berlin, Warsaw, Minsk, Moscow, Nizhni Novgorod and finally to the largest cities of the KhMAR. This route, when fully operational will demand that the road networks are operationally of a very high standard. To achieve this it will be necessary to raise the necessary funds. There are ten directorates that need to be followed in order to be considered an international transport corridors. Three such corridors already exist in the territory of the Russian Federation.
The construction of roads inside the district is conducted not only by local organizations, but also by experts from the nearby regions. There is a site of the Tomsk line in the extent of 90 kms conduct work. But the decision makers of the Tomsk area until now have not been certain of the merits of the exact route of the project, thus, at present the road to Tomsk is only in the future ? if at all.
There are more projects-roads to be built
Neroika - Ust-Puiva - Saranpaul, 85 km
Saranpaul-Agirish, 380 km
Winter highway ? Saranpaul - Ivdel, 525 km