The Caspian Sea region, including the Sea and the littoral states surrounding it, is important to world energy markets because it holds large reserves of undeveloped oil and natural gas. The Caspian Sea's mineral wealth has resulted in disagreements between the five countries over ownership of the resources, and the region's huge energy potential has sparked fierce competition--between producers as well as consumers--over the final export routes for this oil and natural gas. 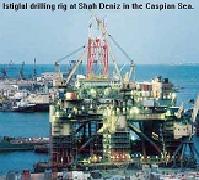 In order for the Caspian Sea region to realize its full energy potential, however, the littoral states must first agree on the legal status of the Sea. Prior to 1991, only two countries--the Soviet Union and Iran--bordered the Caspian Sea, and the legal status of the Sea was governed by 1921 and 1940 bilateral treaties. With the collapse of the Soviet Union and the emergence of Kazakhstan, Turkmenistan, and Azerbaijan as independent states, ownership and development rights in the Sea have been called into question. Until now no agreed-upon convention that delineates the littoral states' ownership of the Sea's resources or their development rights. The potential oil and natural gas wealth, along with the corresponding environmental risks of resource development in the Caspian, have heightened the stakes for each country.
In July 1998, Kazakhstan signed a bilateral agreement with Russia dividing the northern Caspian seabed only along median lines between the two countries, with the waters (covering issues such as shipping, fishing, and environment) remaining under joint ownership. Under this accord, Russian agreements with Iran on the division of the Caspian that date back to Soviet days would remain valid until an overall agreement is reached among all Caspian littoral states.
In January 2001, Azerbaijan President Heydar Aliyev and Russian President Vladimir Putin issued a joint communiqué agreeing to divide the Caspian Sea on the seabed, but keeping navigation on the entire water surface free. Under this "common water, divided sea floor" approach, the sealer could be "divided into sectors/zones among corresponding neighboring and oppositely-located states, on the principle of a median line drawn at equal distance from the sides and modified at their mutual consent." Azerbaijan formerly had advocated for the division of the surface, water, and seabed. At the Commonwealth of Independent States (CIS) Summit in November 2001, Kazakhstan and Azerbaijan formally signed a bilateral agreement defining their sectors of the Caspian Sea. Azerbaijan and Russia are also finalizing a bilateral agreement on the Caspian Sea.
As a result, several conflicts have arisen over mutual claims to different regions of the Sea, especially in its southern waters. In July 2001, Iranian military gunboats confronted a British Petroleum (BP) Azeri research vessel exploring the Araz-Alov-Sharg structure, ordering the ship out of waters Iran claims as its own. Azerbaijan, for its part, has objected to Iran's decision to award Royal Dutch/Shell and Lasmo a license to conduct seismic surveys in a region that Azerbaijan considers to fall in its territory. In addition, Turkmenistan and Azerbaijan remain locked in a dispute over the Serdar/Kyapaz field, while Turkmenistan claims that portions of Azerbaijan's Azeri and Chirag fields--which Ashgabat calls Khazar and Osman, respectively--lie within its territorial waters.
Thus, the unresolved status of the Caspian Sea has hindered further development of the Sea's oil and natural gas resources, as well as the construction of potential export pipelines from the region. Negotiations between the littoral states have made slow progress in ironing out differences between the countries: while Russia, Azerbaijan, and Kazakhstan have agreed on dividing the Sea by a "modified median" principle, Iran insists on an equal division of the Sea, and Turkmenistan agrees on the principle of dividing the Sea, but not the method. A proposed summit of the heads of states of the Caspian countries was postponed three times in 2001 when it became apparent beforehand that no final agreement could be reached.
The Caspian Working Group, comprised of the deputy foreign ministers of each of the five countries, is once again meeting regularly. At the group's session in Moscow in January 2002, the deputy foreign ministers signed a joint communiqué on the legal status of the Caspian Sea. According to Russian Presidential Special Envoy for the Caspian Sea Victor Kaluzhny, the communiqué "covers many interregional issues of five littoral states," in particular, the current political events of Azerbaijan, Iran, Kazakhstan, Turkmenistan, and Russia, as well as positions of the sides on the situation in Afghanistan.
In another sign of progress towards developing a legal convention on the status of the Sea some important steps were undertaken on May 14. the Russian President Vladimir Putin and the Kazakh President Nursultan Nazarbayev have signed a supplementary document to a bilateral agreement (July 6, 1998) on the division of the Northern part of the Caspian Sea. This is to set up the clear definitions of sovereign mining rights. The protocol confirms that Russia and Kazakhstan will share Kurmangazy, Tsentralnaya and Khvalynskoye fields on a 50/50 basis.
The document sets "the geographic coordinates of the modified medium line, which divides the northern sector of the Caspian seabed between Russia and Kazakhstan."

Despite the lack of a multilateral agreement on the Sea, several countries are undertaking active exploration and development programs in what is generally considered to be their sector of the Caspian Sea. In particular, Azerbaijan and Kazakhstan have made substantial progress in developing their offshore oil reserves. Azerbaijan has signed a number of production-sharing agreements--both onshore and offshore--in order to develop its oil and natural gas industries. A significant percentage of Azerbaijan's oil production comes from the shallow-water section of the Gunashli field, located 60 miles off the Azeri coast. Although the country's oil production fell after 1991 to just 180,000 barrels per day (bbl/d) in 1997, with the help of international investment in the sector, Azerbaijan's oil production rebounded to 317,000 bbl/d in 2001.
Likewise, Kazakhstan has opened its resources to development by foreign companies. International oil projects in Kazakhstan have taken the form of joint ventures, production-sharing agreements, and exploration/field concessions. After Russia, Kazakhstan was the largest oil-producing republic in the Soviet Union, but after independence, Kazakhstan's oil production dropped more than 115,000 bbl/d, to just 414,000 bbl/d, in 1995. Boosted by foreign investment in its oil sector, Kazakhstan's oil production has increased steadily since then, with output of 804,000 bbl/d in 2001, most of which came from three large onshore fields (Tengiz, Uzen, and Karachaganak). In addition, preliminary drilling in Kazakhstan's offshore sector of the Caspian has revealed bountiful oil deposits, especially in the Kashagan field, raising hopes that Kazakhstan may become one of the world's largest oil producers.
Overall, oil production in the Caspian Sea region reached approximately 1.3 million bbl/d in 2001. Production in the region is projected to increase severalfold, led by three major projects currently under development in Azerbaijan and Kazakhstan:
? In April 1993, Chevron concluded a historic $20-billion, 50-50 deal with Kazakhstan to create the Tengizchevroil joint venture to develop the Tengiz oil field, estimated to contain recoverable oil reserves of 6-9 billion barrels. Tengizchevroil produced 190,000 bbl/d in 1999, and production could increase to 340,000 bbl/d in 2002 now that the Caspian Pipeline Consortium's Tengiz-Novorosiisk export pipeline is operational. Additional export pipelines likely will be needed, but given adequate export outlets, the Tengizchevroil joint venture could reach peak production of 750,000 bbl/d by 2010.
? In what was described as "the deal of the century," in September 1994 the Azerbaijan International Operating Company (AIOC) signed an $8-billion, 30-year contract to develop three Caspian Sea fields--Azeri, Chirag, and the deepwater portions of Gunashli--with proven reserves estimated at 3-5 billion barrels. Almost all of Azerbaijan's production increases since 1997 have come from AIOC, which produced about 100,000 bbl/d in 2000 from ACG. In the first three months of 2001, AIOC produced an average of 118,880 bbl/d of oil from the ACG deposits. The first phase of full-field development, which will increase production to 400,000 bbl/d, has been delayed pending a decision on export options, but oil production at ACG is expected to reach 800,000 bbl/d by the end of the decade. The planned Baku-Ceyhan Main Export Pipeline will be the main vehicle for ACG oil exports.
? Although signed with less fanfare in 1997, the offshore Kashagan block being developed by the Agip Kazakhstan North Caspian Operating Company (Agip KCO, formerly OKIOC) may turn out to be more lucrative than both the Tengiz and the ACG group of deposits combined. Preliminary drilling in the Kashagan block has produced spectacular results, with analysts estimating possible oil reserves of up to 40 billion barrels (10 billion barrels of which are thought to be recoverable). Although Agip KCO has released estimates of Kashagan's potential output that are significantly below earlier expectations (around 1.2 billion recoverable barrels), oil analysts are hailing the field as the largest oil discovery in 30 years.
These projects, along with others currently underway, could help boost Caspian Sea region production to around 3.7 million bbl/d by 2010. By 2020, production could increase by another 2 million bbl/d. Although not "another Middle East," as some analysts have claimed, the Caspian Sea region certainly is comparable to the North Sea in its hydrocarbon potential.

Source : Sources for this report include: BBC, EIA, CNA