In the whole 19th century, Central Asia was in the heart of a complex geostrategic game which saw strong rivalries and conflicts between the British and the Russian Empires for supremacy in Central Asia.

In the whole 19th century, Central Asia was in the heart of a complex geostrategic game which saw strong rivalries and conflicts between the British and the Russian Empires for supremacy in Central Asia. At that time, the main aim for the two countries was to extend at maximum their territories. The Great Britain wanted to secure the areas surrounding rich British India and the Russian Empire was trying to find an access to the Indian Ocean. In this context, the main piece of the game was Afghanistan, which was created as a transit state between the two belligerents. This competition finally ended in 1917 following the Russian Bolshevik revolution.

Nevertheless, these last few years in the region, it appears that we witness the rise of a new “Great Game”. The actual situation is much more complex than the previous one from the last century. First, many different actors are involved. Secondly, it is not anymore just a question of geographical territories control. The key elements of this new game are turning around pipelines control, petroleum consortiums, tanks routes and oil and gas fields. Finally, the central strategic location doesn’t take place in the Afghan area anymore but moved north in the actual territory of the “young” republic of Kazakhstan.

From the origins of the new “Great Game”

It’s the collapse of the USSR in the beginning of the 90’s that can be seen as the main driving force which relaunched strong political and economical interests for the whole Central Asian area. Following this historical event, the new Russian state was confronted to strong economic, political and social disorder and was unable to keep any control on its former influence zone in surrounding countries like Kazakhstan. This situation brought new actors such as State and private oil companies to invest and try to grow their influence in the area. As for foreign companies, which dreamt about the fabulous oil and gas reserves of the Central Asian region for decades, these ones suddenly saw their dreams coming true. They got a potential access to an important and underdeveloped part of the former Soviet hydrocarbon treasure.

Of course, Russia was still present in the area and when the Russian Federation recovered, the Kremlin tried to protect its interests in Kazakhstan again. The two countries share together a long and strong historical, linguistic and economic background. Consequently, the Russian influence can be seen as “natural” there. However, China, the other big neighbor, tried at the same time to play a new role in the region as well as the USA, especially through the US oil giants such as Chevron. Even Turkey used its common cultural and historical past to facilitate its investments in the country in many sectors such as oil industry or retail sales.

The republic of Kazakhstan, a strategic territory

So, why did we witness such a rush in the new independent Kazakhstan? Mainly because of the prodigious oil and gas reserves the country has. According to the US energy state department, Kazakhstan owns the 8th oil reserves in the world. Its proven reserves should reach 100 billions barrels. The actual production comes mainly from three giant oil fields: Tengiz (280,000bbl/d), Karachaganak (250,000bbl/d) and Uzenmunaigas (135,000 bbl/d). In addition to them, in 2000 the new oil field of Kashagan was discovered. This one is the largest discovered field outside the Middle East during the last 20 years with 38 billions barrels reserves. Regarding the gas exploitation, the industry is relatively new in Kazakhstan. However the country still possesses 1% of the worldwide proven reserves which are estimated to be between 3.3 and 3.7 trillions cubic meters. Following the strong development of this industry within last years, Kazakhstan has all the potential to become soon one of the world biggest gas producer.

Furthermore, the Kazakh republic is not only the richest country in Central Asia. On the contrary to other countries, which possess important hydrocarbon fields, such as Uzbekistan or Turkmenistan, Astana, under the pressure of its president Nursultan Nazarbaev, had massively opened its economy to foreign investors since becoming independent in 1992 (even today Kazakhstan is the country with the highest rate of foreign investment in the whole CIS). 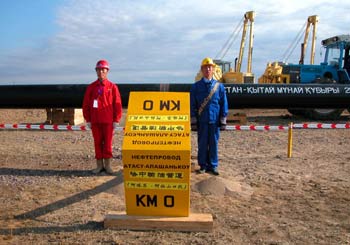 Consequently, a strong competition was launched between the biggest international oil companies to try to control and exploit the country’s mineral resources. As a result, 87% of oil and 88% of gas production are controlled by 12 companies, mostly European, Chinese, Russian or American. The biggest oil producer of the Kazakh republic is the Tengizchevroil consortium leading by the American Chevron. The structure produces more than 24% of the national production. The national oil and gas firm, KazMunaigaz, takes the second place with its majority participation in Uzenmunaigas project, representing 11% of the national production. Finally, Karachaganak project which is under control of Italian EMI, English BG, US Chevron and Russian Lukoil, produces only 9% of the national oil production but more than 47% of gas production.

In addition, 85% of the investments in the oil and gas industry come from abroad. The three main investors are the USA, Italy and China. However, the Kazakh government has interests in all the projects. This strong presence of many foreign companies in such a sensible domain pushed the Kazakh government to regain control over its resources. Indeed, the country needs the presence of foreign engineers because of a serious lack of knowledge and technologies to exploit all its various oil and gas fields. But the main problem is the serious dependency Astana has on hydrocarbons revenues. The sector represents more than 35% of the country’s export revenues and, according to the International Monetary Fund (IMF), more than 20% of the state budget. With such a dependency linked to a domain out of state control, the Kazakh government has recently started to cancel and renegotiate most of its contracts with the oil companies, making the access to Kazakh oil and gas less easy. The new direction taken by the Kazakh administration - promoting the national company KazMunaigas - is fully understandable if you take into consideration that the IMF has predicted $275 billion revenue from oil and gas exploitation for the next 45 years.

With the oil sector’s exploitation already shared between the Kazakh, Russian, American, Chinese and European companies what kind of competition should appear? In fact, what can you do when you have drilled your oil and gas if you can not transport and sell them in international markets? The real power in Central Asia belongs to the one who can control the evacuation ways of the black gold. So, in this field, Russia is the undisputed winner. Pipeline control is the new main key element of this new “Great Game” in which rifles and guns are substituted by an economic, politic and diplomatic competition between different states which have economic interests in Kazakhstan. For historical reasons Russia controls almost all the pipeline networks of the area and the country is very aware about the gigantesque power it possesses. Until today, most of the Kazakh oil and gas is still transported via the two main Russian pipelines: The Caspian Pipeline Consortium (CPC) and the Uzen-Atyrau-Samara pipeline. 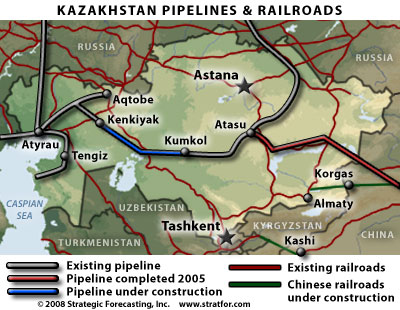 With full Russian control over the pipelines (by moderate their volume and speed), the Kazakh republic tries now to diversify its hydrocarbon outlets. However, despite new Baku-Tbilisi-Ceyhan (BTC) pipeline project, supported by the USA, nothing has changed. Only the Chinese, who were ready to do everything to secure their energy demand, were aloud to build a very expensive project, the Atasu-Alankshu pipeline which has been operating since 2006. Concerning the other oil and gas exporters from Central Asia, few pipeline projects were presented such as the Trans-Caspian gas pipeline (TCGP), supported once again by the USA, but nothing moved because of the strong political and economic pressures coming from Moscow.

As a final word, we can say that the only real power in the region still belongs to Russia through its pipelines monopole. Despite the creation of a new transit way to China in 2006 it doesn’t seem that actually someone can claims to remove the Russian Federation from its leading place in this new Central Asian “Great Game”.