G.I.Shmal: “Exhibitions must work for the branch” 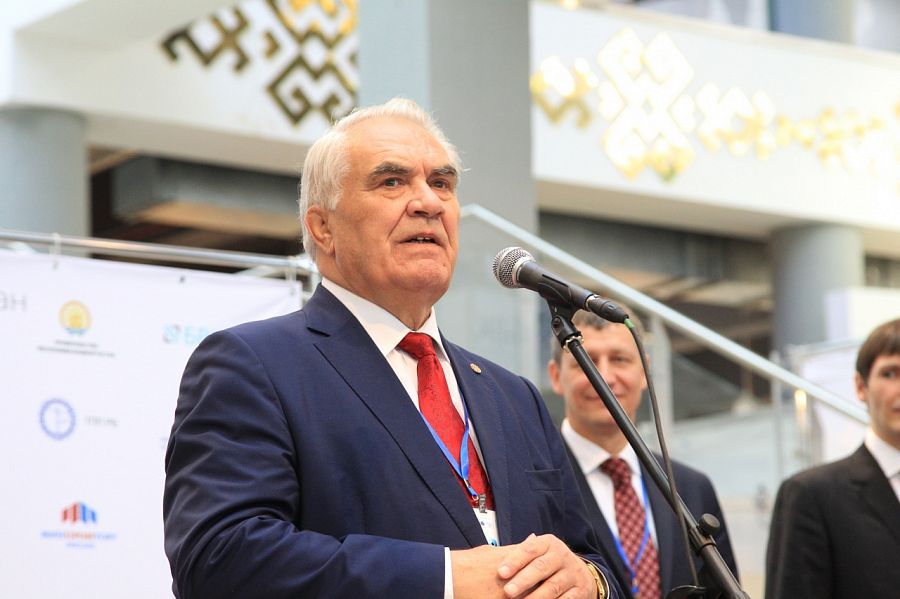 - For many years, the Neftegaz exhibition has taken a leading place among industry events not only in Russia, but also in the world. Today, when the political and economic situation in the Russian Federation is far from stability, does the importance of such events increase?
- Among the Russian events, Naftohaz really takes a leading position. In addition, this is not just an exhibition, it is also the National Oil and Gas Forum - all together. At one time, when we thought about creating such a platform, there were certain doubts whether it would be possible. I believe that the idea itself turned out to be fruitful and the oil and gas community supported it, so today we can say that the Oil and Gas Exhibition and the National Oil and Gas Forum took place.

It is important that serious administrative forces were involved in preparing the event - in addition to the Ministry of Energy - God himself ordered them - Neftegaz is supported by our Union of Oil and Gas Industrialists, the Chamber of Commerce and Industry of the Russian Federation, Expocenter, where the exhibition is actually held. The Russian Union of Industrialists and Entrepreneurs, the Russian Gas Society are always actively involved. The participation of the latter is somewhat less than we would like, but, nevertheless, their president, Pavel Nikolaevich Zavalny, annually takes part in the exhibition and the NSF, conducts round tables, etc. It is precisely the combination of all efforts that today makes it possible to gather within the framework of the exhibition and forum a good level of companies, speakers, moderators, etc.

Such events are important, firstly, as a platform that allows you to show what's new in the industry over a period of time. Secondly, it is extremely important from an economic point of view: the fact is that earlier, in Soviet times, we had a fairly clear system for introducing new achievements, new technologies, I’d like to stress the introduction. For this there were a variety of methods - administrative, financial. We had the State Committee on Science and Technology, which had more than 100 targeted programs, all programs were funded, for each was answered by a specific person of a rank not lower than the deputy minister of the relevant department. I myself remember 2 programs. The biggest awards received precisely for the introduction of new technology. Now this is not, therefore, people, roughly speaking, do not know what is being done at the neighbors.

In the current economic situation, exhibitions, forums - this is, in fact, the only place where you can exchange opinions, see, touch real samples. They have to work for the industry. And we can state that Naftohaz in this sense was held as a demonstration platform, as a place where you can discuss the most acute problems that exist in our oil and gas complex, and there are a lot of questions about these issues. By the way, it is very good that we have a sufficient number of territorial and smaller branch events: in Ufa, Kazan, Tyumen, Samara, Saratov, Novy Urengoy, etc. This is a good incentive for the regions.

- You said that exhibitions are platforms for demonstration of innovative technologies, equipment, etc. Nevertheless, there is an opinion that Russian companies are hard at introducing new developments. In your opinion, industry events help to reverse this trend?
- Demonstration is one of the main tasks of exhibitions, yes. You are absolutely right, many different people come up with inventors with proposals, but it is very difficult to implement them, because the oil company says: “Bring the finished sample, show, test, prove its effectiveness, then I'll buy it from you”. And to do this, inventors need to spend money, but we have not solved this topic. It may be necessary to create a special bank that would issue loans at normal interest rates to create new technologies.

Why am I talking about this? Take at least the Americans with their shale oil and shale gas. Due to what they overtook us today? Due to the fact that these areas were engaged in small business, not a single large American company was engaged in shale oil. And only now, when they saw the result, did they start buying some small companies in order to possess this know-how. They have been engaged in technology for 30 years and have invested $ 30 billion but have created technology, but we cannot. In Russia, in fact, it is full of similar hard-to-recover reserves, not a copy, of course, but close. Take, for example, the Bazhenov formation in Tyumen, where the resources are colossal. In order to get them, it is necessary to develop technology, and the creation of a special bank for lending would solve the problem.

The same task - to help introduce new things - is also facing our exhibitions. True, there is also a problem here: in order to make even a small stand, you must still spend certain funds. I think there should be support from the state. By the way, today many virtual samples are demonstrated, and this is not good. It is necessary that there was “live” equipment, which used to be more. Mobile drilling rig, cranes, etc. This refreshes the exhibition, making it more interesting.

- The National Oil and Gas Forum (NSF) is a scientific and business platform at the federal level for open discussion. What issues are most important for Russian oil and gas today?
- Lately, several points have become aggravated. Perhaps the first is issues related to oil reserves. The fact is that the quality of stock is deteriorating, more and more so-called hard-to-recover reserves appear. If 20 years ago they occupied only 10% of the total, today it is 60-70%. We are not good at searching, almost ruining our exploration, although, starting with Peter I, who in 1700 issued the first decree on the creation of the Mining Order, Russian geology was just developing. All rulers acknowledged the need to develop this trend, even Lenin. And during the war years, the search for technology never stopped, and today we have even ruined what we had.

The second is the digital economy, which is now widely known. We met with the Minister of Digital Development at the Chamber of Commerce and Industry, and I told him that there was no need for fanaticism. As the saying goes, a digit itself will not plow the land. Yes, you can make the drilling mode more optimal, you can develop a detailed dynamic model of field development, but new jobs will not appear and GDP will not grow. Ultimately, everything is human intelligence. We already have digital fields, we are engaged in them, but not massively: Gazprom Neft, LUKOIL, Tatneft and a number of other companies are developing this trend to a point. One needs to be calm about digitalization, thinking about how to increase GDP, how to make gas available to everyone, etc. The third thing that can and should be said is import substitution. For example, I don’t like this concept; roughly speaking, it throws us back. So what is a replacement? For example, you have a tape recorder, you have to replace it with the same one, but it’s all the same yesterday, and we have to talk about innovations, about the introduction of a new one.

Let me give an example: once Bogdanov Vladimir Leonidovich (Russian engineer, general director of Surgutneftegaz, - ed.) asked the question: “Tell me, what do you think about import substitution?” He replied in the spirit of Suvorov’s soldier: “Our company has no such a word. We study everything new that appears, we implement, therefore we are an import-independent company. ” This, in my opinion, is the correct position. I think that it is import independence that should be at the heart of all our work when we talk about eliminating dependence on imported products.

I repeat: no need for bigotry in serious decisions. For example, someone had the idea of ​​"Let's explore the development of the Arctic shelf." I explain: I, as a specialist who has been working in the oil and gas system for 50 years, say that even at current prices, not a single project of the Arctic shelf will be profitable. And when the price of oil falls down, it has already dropped to $ 40, and to $ 35, all the more. Therefore, it is necessary to deal with the shelf, but in the areas of studies and exploration, we must solve the problems associated with securing the Arctic regions to us, creating the infrastructure, the necessary capacities for building the same drilling platforms, etc.

Now we have only one platform working on the Arctic shelf at the Prirazlomnoye field, but in order to have a really serious oil and gas presence there, we need several dozen of such platforms. Moreover, we do not have a clear technology in terms of environmental safety, i.e. if an oil spill, conditionally, has occurred, and this oil has gone under the ice - how can it be taken from there? No, this leads to the fact that we can destroy the entire planet, if, God forbid, what happened in the Gulf of Mexico happens. That is why we must act very carefully.
In accordance with the law, companies with state participation such as Gazprom, Gazprom Neft and Rosneft can work on the Arctic shelf. What about LUKOIL? They are working in the North Caspian, on the Baltic, i.e. the company is very prepared in terms of developing offshore projects, but they are not allowed to the Arctic shelf. I think this is just discrimination.

This year in May we were at the Filanovsky field, and I, as an engineer, “take off my hat” before what was done: all the equipment, all the structures were made in Russia, in shipyards or enterprises of the Astrakhan region. Yes, the equipment is different, incl. and foreign, but did all the Russian engineers and workers. This suggests that we can do. But fanaticism is not necessary. All these issues must be treated competently and professionally, so that the basis is a clear calculation. Many, of course, will disagree with me in terms of the Arctic, but, as my first shop manager said, it is necessary to measure seven times and cut them off to another.

Returning to our National Oil and Gas Forum. I am glad that this platform gives us an opportunity to speak frankly about problems, allows people to freely, calmly express their point of view, their opinion, which does not always coincide with the official position. The forum enjoys a certain authority and respect from our oil and gas community; therefore, we believe that it is necessary to further improve its forms - fewer long reports and more proposals and discussions, because truth is born in disputes.

And the most important thing: it is extremely important that sound proposals and judgments reach those who make decisions much faster. Today it is a serious problem. What we talked about 5 years ago is being voiced only now, and you need to understand that the time factor is the economic factor, because you didn’t have time today - you don’t have time to do it. Once Mikhail Grigorievich Rudin, a specialist in oil refining, was asked: "Tell me, how far is Russia lagging behind the West?", He replied: "Forever." And he is right, because the time factor has become a real economic category. In the West, the decision is made in a month, and it takes us years to do it. And industry platforms, with the right approach, help to make this time factor work for us.