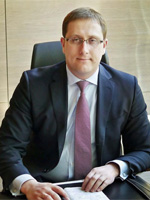 - What principles did you follow to develop the investment program for the APG utilisation?

- We included in the core portfolio only those projects which we are already developing or which have reasonable grounds to be implemented. These include South Priobka, Phase 1 of the Noyabrsk Integrated Project (NIP) (Vyngapur oil fields), and Phase 2 of the NIP (although, so far, this is only at the design stage), as well as Gazprom Neft -Vostok's project in the Shinginskoye field. In addition, we need to put in place automated accounting systems, which is one of the most stringent requirements of the supervisory authorities. We have to do this very carefully, while keeping to the very strict deadlines for launching the facilities. The core portfolio is valued around 8 billion roubles. There is also a number of projects, valued at around 13 billion roubles, which are, in fact, decreasing efficiency of the oil production in several small and medium-sized remote oil fields with declining rates, where the APG utilisation infrastructure will be idle in just a few years. Unfortunately, the development of the oil sectors of these assets is so inefficient that investing into the APG utilisation is actually "killing" the feasibility of further developing of these fields; the integrated economics of oil production and use of associated petroleum gas is becoming negative. In other words, it is becoming more cost-effective for the company to stop oil production than to use APG.

- How did you determine whether or not an asset would be included in the core portfolio? Surely there were some borderline cases?

- Several system criteria were used here: the volume of flared gas, the cost-effectiveness of alternative options for its use, the time rate of construction. Complex Field Development Projects (CFDPs) were an important foundation for decision-making. Only a full long term evaluation of each asset, taking into account all uncertainties, opportunities and risks involved, enable us to plan investments in the utilisation of APG with any certainty. For example, not very long ago we had practically no idea of the value of the remote fields in the Noyabrsk region, and estimates were made as a part of the development of a CFDP. Now, we have integrated our understanding of the economics of oil production in the fields with the economics of utilising APG, which made the decision-making process for associated gas utilisation projects significantly more efficient.

- And what is the situation? Everything's understood regarding the base portfolio, but what is going to be done with the difficult assets?

- Somewhere, perhaps, we'll sort it out through interaction with government agencies, etc. We work hard jointly with the government relations department and our top managers to resolve this issue. For example, this has to do with the second phase of the NIP. We have several fields with very low production rates, but with a meaningful amount of flared gas. The poor economics of oil production and APG utilisation put us in a situation when we have to decide whether we heavily invest (around 4-6 billion roubles) into infrastructure for utilisation of associated gas, thus making a loss on the development of those sites, or we suspend work on these assets. On one hand, putting an end to development on these fields would allow us to reduce the amount of penalties paid for flaring and improve our reputation by increasing utilization, and we could effectively invest the money saved into other oil-producing assets. However, stopping oil production is an extreme measure, so we are trying to explain in detail to the supervisory authorities that this is an extremely difficult decision for us which may only be taken after careful consideration of all factors; we can't rush it. Nevertheless, we as a company must be prepared for such consequences as long as state agencies continue to maintain strict policies in matters of reducing APG flaring.

Another way of solving this could involve changing the government requirements to APG flaring in "difficult" fields, such as setting a target level of utilisation at less than 95%, using tax incentives, etc. In exceptional cases it makes more sense to continue economical oil production in some fields even when negligible amounts of APG have to get flared, as long as this is outweighed by the benefits to the state and the industry. We are consistently convince the governmental authorities and regulators, showing them the practical and economical advantages of such methods.

- How come that so much APG is wasted instead of put to good use, not just within Gazprom Neft, but across the industry?

- For the industry this is a historical problem; APG utilisation has never been a real goal for oil companies, especially with a lack of incentives to do this. Over the last 5-6 years several companies have begun to turn the situation around, in cases when this didn't just help them to resolve the APG issue, but also brought decent financial gains. As for us, compared with the level of APG use at Sibneft in the last few years, we have definitely made progress. The lack of significant progress in reducing waste is mainly due to the fact that most of our drilling in recent years has taken place in remote fields with no access to the APG transportation and utilisation infrastructure. However, the new streamlined process of preparing, reviewing and implementing the APG utilisation projects we currently use at Gazprom Neft, will allow us to make a significant leap forward.

- Gazprom Neft has some major new projects underway. How has the APG problem been addressed there?

- The pilot projects on our new major assets in the Yamal Autonomous District - Novoportovskoye field and the Messoyakha group of fields will be complete after 2015-16. The Company's position is that full-scale development of these fields will go ahead only after the 100% APG utilisation scenarios are in place.

- And what about the new assets being already in operation?

- There's no problem in the Magma fields; all APG is shipped to the Nizhnevartovsk gas processing plant. As for Orenburg, well, the more gas, the better. There is plenty of spare capacity in the gas processing plant so, accordingly, gas is of great value to us.

- What advantages gives this portfolio of APG utilisation projects?

- Implementing these core projects will enable us, by late 2012-early 2013, to reach a level of APG use to match the very top Russian companies (in terms of dealing with this issue), which are currently using around 80-85% of all produced APG. We will be able to talk about more exact figures based on the 2012 results, following a large-scale drilling program in high gas content fields. At the same time, it is important to understand that this level of utilisation will be achieved with the optimum economic benefit to both the company and the industry. The question of deadlines for achieving the mandatory utilisation level of 95% is directly linked to issues of regulating the flaring of APG in remote fields with negative integrated economy, green fields, etc. We are prepared to carry out already-developed technical solutions; however, we consider it necessary to reduce the burning of APG in a manner which is cost-effective to the state, and this requires a more flexible regulatory environment as well as incentives.

- It is technically possible to achieve a level of 98%. However, our position is that, right now, the appropriate solution would be to bring the level of utilisation across the entire country to a certain economic optimum level. It is clear to all that the industry has to reduce its burning of tens of billions of cubic metres of APG, which could be put to use to create additional value for both the companies and the state. However, volumes whose utilisation is directly connected to economically cost-ineffective investments will require a more informed decision. For example, in order to fully meet the 95% utilisation target, it will be necessary to establish reserve facilities throughout the country, that is, to build more power lines, gas processing plants and so on, which will only work a few days each year during repairs and maintenance of the main processing lines. On a national level it would take billions of roubles, which would be economically inefficient but would utilise a certain amount more APG. It would be more efficient not to freeze investment in unprofitable projects, but to commit it to the intensive development and modernisation of existing assets.

In addition, the average level of utilisation for the industry does not entirely reflect the problems on those remote fields with integral negative oil and gas production economics, because it does not stimulate the development of these assets; rather, it leads to the cessation of production and the devaluation of the projects.

It is difficult to say what proportion of the 300 billion rouble investment into the utilisation program, which is necessary to enable the industry to reach the 95% level, will be needed to bring this figure to the optimum economic level, and what proportion will need to go to the cost-ineffective remainder. If the proportions are the same as those we have seen within our company, then about 150 billion roubles will end up being "buried in the ground", whereas they could have been used far more efficiently. Therefore, we will continue to communicate with government agencies to find the best solutions which will benefit business, society and the state.