Having recently started construction, the Turkish Stream project has made some progress with the joining of the shallow and deep-water pipeline with V. Putin in attendance.

Having recently started construction, the Turkish Stream project has made some progress with the joining of the shallow and deep-water pipeline with Russian President Vladimir Putin in attendance.

The Turkish Stream is an energy transfer project that will carry Russian natural gas to Europe through the Black Sea via Turkey.
However, we cannot consider the Turkish Stream merely an energy project, and should assess it together with the southern gas corridor (SGC), which is being primarily constructed in Turkey.

The transfer of energy to Europe in the form of oil and natural gas, as well as the energy supply and operation, and the concomitant financial wealth will bring a position of political sovereignty.
This is because those who convert this energy into trade and capital power will not only garner economic power, but also political power and determine the political structure of these energy regions accordingly.

At one point, a large part of the last 2 centuries of the political history of this vast region is the history of the share and seizure of energy fields and energy trade.

Europe's energy security, as well as its trouble-free and affordable energy supply, is not only the most important parameter of the continent's political and economic security, but also a question of the U.S.'s transatlantic security.

Indeed, the European Union's enlargement phases reveal this very clearly.
The EU's process of enlargement, by accepting the sovereignty of the states, has been maintained in the form of disintegrating and shrinking the states since the early 1990s.

This process was led by Germany, but took place with the approval of the U.S. and within the framework of transatlantic security.
Brzezinski described the disintegration of Yugoslavia as Balkanization and predicted the same process for the region that he defined to be the Balkans of Eurasia.

In his book The Grand Chessboard, Brzezinski clearly states that the word Balkans evokes ethnic conflicts and regional power competition in Europe, and that Eurasia has its own Balkans as well.

He defines the Balkans of Eurasia as a rectangle and puts Southeast Europe, Central Asia, the Persian Gulf, the Middle East and some part of South Asia in it.
In other words, the Balkans of Eurasia consist of all the energy fields of the Caspian region, Iraq, Iran, the Eastern Mediterranean basis, Turkey, Egypt and Kazakhstan in the far north.

Brzezinski wrote this book from 1996 to 1997 when the Balkanization in Europe produced results culminating in Yugoslavia being disintegrated.

The theses in this book still constitute the Pentagon's transatlantic security paradigm, and all strategies - battles, civil wars, coup attempts and the relevant diplomacy - take shape on the basis of this strategy.
Unfortunately, however, the world is no longer the world of the 1990s, and Brzezinski's arguments are full of holes now.

This is because dynamics in both Europe and the vast Asia region have changed.
Moreover, countries like Turkey have achieved a very important line of stability and joined both Asia's growth and Europe's development. As such, it has become impossible to take these countries back through military coups.

Coup games in Turkey will only leave those who want to stage them in the lurch like the July 15 coup attempt.
On the other hand, the destabilization of Turkey will not harm Turkey alone, but will destroy the security concept that Brzezinski calls the Atlantic Security.

So, the destabilization of Turkey, or the Balkanization of it as Brzezinski suggests, is now a systemic problem. This must be seen by the U.S. first.

Now, let us revisit the book. Brzezinski also sets a map as the Critical Center of European Security, which sheds light on what is happening today.
This map starts from the Spanish-French border and reaches Russia via France, Germany, Poland and Ukraine.

The history of this line is interesting, given that Adolf Hitler planned to occupy Russia through Poland by following the same line.
And this line also covers northern trade routes that will reach Europe from Asia Pacific.

Let us see what is happening now. Within the framework of the Turkish Stream, Russia is bypassing Ukraine and reaching Europe via Turkey.
So, Russia and Turkey are bypassing the Atlantic security line. 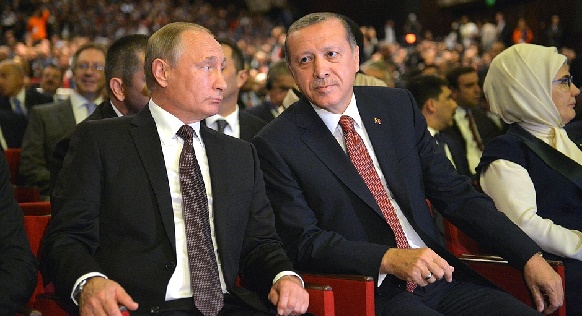 On the other hand, the SGC, which constitutes the backbone of the Trans-Anatolian Natural Gas Pipeline (TANAP) project, is bringing Caspian energy resources to Europe via Azerbaijan, Georgia and Turkey (mainland).
In addition, the SGC is the only line to commercialize Iranian and Levantine resources and the resources that Israel has reached in the Eastern Mediterranean.

In other words, the 2 energy lines, the Turkish Stream and the SGC, are bypassing the critical centers of Euro-Atlantic security in the north (Brzezinski, 97) in the north, and the countries that easily knuckle under the West, like Egypt, or easily become destabilized (like Iraq) in the south.

Every country should support this new global integration project, which will transform the cold and hot conflict areas that have been going on in this region for a century to peace zones and ensure trade in the region.
Brzezinski's theses are no longer valid.

May he rest in peace. Now, let us leave him alone now and accept that he is dead in every sense.

I hope the Turkish Stream project, which was launched by President Recep Tayyip Erdoğan and Russian President Vladimir Putin this weekend and the construction of which has already started, will bring peace and prosperity!