Romania is poised to step up the game and ramp up its gas output as soon as possible.

Do you know what unites France, Portugal, Finland, Sweden and Belgium? They all have no gas production whatsoever (interestingly, Paris is proud of it and is intent on fully banning the non-existent gas production by 2040). Meanwhile, Romania, long in the shadow of European majors despite being the EU's 3rd-largest gas producer, is poised to step up the game and ramp up its gas output as soon as possible.

While traditionally Romania has been an onshore-producing country, its Black Sea deepwater fields bid fair to finally propel the country into the club of gas exporters. This will entail overcoming numerous challenges, be it lack of infrastructure or malign government interference - how Bucharest will resolve these will predetermined its success.

Romania prides itself in having an oil and gas history that goes back more than 150 years. Romania joins other nations in claiming it had built the 1st oil refinery ever. It also claims that Bucharest was the 1st city to be illuminated with kerosene lamps.

As oil's allure is waning, gas prospects are exciting both Romanian authorities and investors. Investors in Romania's gas sector are exploring possibilities beyond the Moesian Platform, which hitherto accounted for much of its hydrocarbon production, more to the east and north along the Pericarpathian fault line.

This makes perfect sense as a USGS bulletin estimated there remain around 561 BCf (16 BCm) of undiscovered gas reserves in the Moesian Platform, new stimuli are needed. A recent 2016 discovery in Buzau County turned out to be the largest gas find in the last 30 years - the 26 BCm Caragele field is expected to be brought onstream in 2019.

More risk-prone companies, such as Prospex, are developing biogenic gas reserves in the northeastern part of the country, albeit thus far with limited success (the Bainet-I well found approximately 1.5 BCf of gas, to be used locally). Yet it is Romania's offshore zone that presents the most mouth-watering prospects. 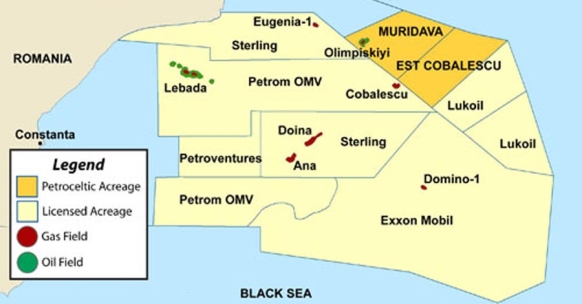 Romania was the 1st Black Sea country to tap into its offshore resources; it spudded its 1st offshore well back in 1981. Since then one of the leading Romanian companies Petrom holed in more than 80 wells, overwhelmingly in the shallow parts of the Black Sea.

However, as it turned out, the real treasure chest is deepwater - in 2012 ExxonMobil and OMV Petrom discovered the Neptun field, 930 meters deep, the reserves of which are estimated between 1.5 and 3 Tcf (43-85 BCm).

The companies are now in the front-end engineering and design stage, after a final investment decision in late 2019, 1st gas is expected by 2021. The adjacent Pelican block is expected to bear another 20-25 BCm of gas.

Moreover, LUKOIL's Lira well at the Trident block, some 90 miles away from shore at sea depth of 700-800 meters, struck gas which is expected to amount to more than 30 BCm. As the block's area exceeds 1000km2, further exploration drilling might bring to light new prospective fields.

The main challenge that offshore investors face is marketing the gas in an environment still far from optimal. Although Romania is almost self-reliant when it comes to gas (it imports only around 10 % of its needs from Russia) and it could potentially export its gas abroad, the bad state of its infrastructure has hindered these plans thus far. Pressure in its gas pipelines is lower than in those of adjacent countries, so only after 2019 can those exports come into question.

Then the Hungary-Romania-Bulgaria interconnector should be completed, allowing for exports in near markets. If increasing volumes from the Black Sea are to be exported, Romania's domestic infrastructure ought to be given a substantial boost so as to accommodate more molecules.

Infrastructure isn't the only structural default limiting Romania's gas production. Even poor efficiency is not the most dangerous encumbrance. Although Romania has more than 13 000 producing wells spread over 400 oil and gas fields, its well production rates are notoriously low (21 barrels of oil equivalent per well/day compared to 2,350 boe/w/day in Norway or 363 boe/w/day in the UK).

Political manipulations scare investors the most. Left unheeded, it will create a lot of headache for producers. Going against general European trends of falling royalty and specific tax rates in 2014-2016 against the background of falling hydrocarbon prices, Romania's royalty and tax rates actually increased to an average of 17.5 % (only Hungary and the Netherlands, seemingly intent on closing down Groningen, have higher taxation rates).

The EU would be very interested in seeing more Romanian gas on the European market. Even if it might seem as a drop in the bucket compared to Russian export volumes, it would do Brussels undeniable good to wield an additional producer.

This explains why the European Commission opened an investigation into the dealings of Romanian state-owned gas transmission system operator Transgaz, supposing it abused its dominant position and deliberately underinvested in infrastructure.

Getting completely rid of corruption in Romania might be a longshot but a worthy cause - the development of the Black Sea's gas reserves could kickstart a long-awaited energy sector transparency movement there.