One of the regions in the world that does not receive as much attention as it probably should is the Caspian Sea.

One of the regions in the world that does not receive as much attention as it probably should is the Caspian Sea. The Caspian, which is the world’s largest inland body of water, sits in the heart of the Eurasian landmass, and anything at the heart of something is by definition important.

The Caspian is also nestled between two major energy-consuming markets: Europe and Asia. Though often overlooked, many of the world’s geopolitical challenges converge on the region: A resurgent Russia, an emboldened Iran, frozen conflicts, an economically assertive China, and the rise of extremism.

More importantly, the Caspian region is a crucial geographical and cultural crossroads linking Europe and Asia and has proved strategically important for military and economic reasons for centuries. This is why the recent news that the 5 littoral countries of the Caspian Sea - Russia, Azerbaijan, Iran, Turkmenistan and Kazakhstan - have come to a tentative agreement on how and by whom the Caspian can be used is so important.

This agreement hopes to settle a legal dispute regarding the status of the Caspian. Is it legally a sea or a lake? This dispute might seem trivial to an outsider but it could have serious economic, security and political implications for the region and beyond depending on the outcome. An agreement would also pave the way for the construction of a Trans-Caspian Pipeline - something that Turkmenistan and Europe need, and something that Russia and Iran have, until recently, sought to avoid.

The draft deal, if agreed, would acknowledge that the Caspian is a sea; allow construction of undersea pipelines; give each littoral state sovereign control over 15 nautical miles out from its coastline and exclusive fishing rights for a further 10 nautical miles; and would bar any non-Caspian country from having a military presence on the Caspian. 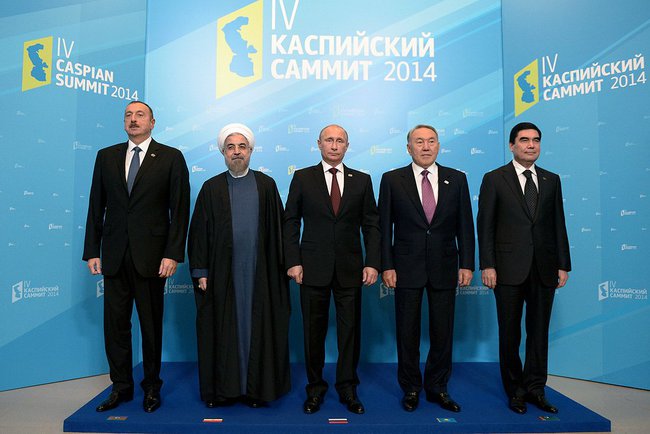 For Turkmenistan, Azerbaijan and Kazakhstan, the provision about pipelines is probably the most important. For Russia and Iran, both of which are concerned by outside (i.e., United States) military presence on the Caspian, the latter is of particular importance.

As the country with the shortest Caspian coastline, Iran’s position is straightforward: They consider the Caspian to be a lake. To back up this claim, Tehran uses old treaties signed with the Soviet Union in 1921 and 1940. Yet, Iran’s reliance on these treaties is curious since neither makes any reference to seabed ownership or its use.

But Iran has been playing with a weak hand on this stage lately. Its economy is reeling from the impact of re-imposed sanctions after the US left the nuclear deal; as each month goes by, Iran is being sucked further into the civil wars in Yemen and Syria; and economic protests have been a common feature across the country since last December. If ever there was a time that Tehran was more worried about issues other than the legal status of the Caspian, it is probably now.

The 3 former Soviet states - Azerbaijan, Turkmenistan and Kazakhstan - consider the Caspian to be a sea and, therefore, claim the seabed should be divided based on the coastline. Russia’s position on seabed ownership is complicated. The Russian Ministry of Foreign Affairs considers the Caspian to be a lake, believing this is the best way to preserve Russia’s dominant geopolitical role in the region.

On the other hand, the fuel and power ministries and the oil and gas lobby consider the Caspian to be a sea, as this would create more opportunities for Russian companies to compete for more lucrative contracts. At best, Moscow’s incoherent position has evolved into what is best described as common waters, divided bottom.

With this policy, Russia is able to maintain surface navigational rights and, therefore, naval supremacy in the Caspian, while taking a more pragmatic approach to oil and gas explorations below the waves. Russia is trying to re-establish its influence in the region, so cutting a pragmatic deal with Azerbaijan, Kazakhstan and Turkmenistan is sensible diplomacy.

In addition, with the Nord Stream 2 natural gas pipeline soon becoming a reality (delivering Russian gas directly to Europe), Moscow could be more relaxed about the prospect of a Trans-Caspian Pipeline between Azerbaijan and Turkmenistan. If a resolution is agreed that allows the construction of pipelines, there is potential to change the energy landscape of Europe. 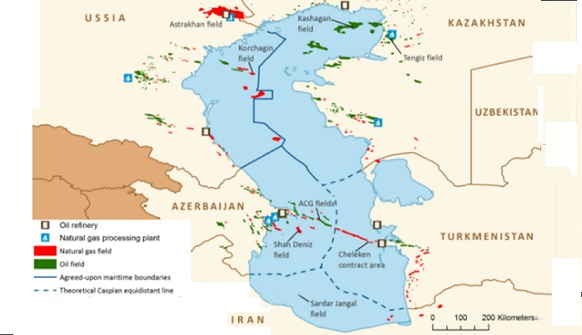 An estimated 292 trillion cubic feet of natural gas in proved and probable reserves are in the Caspian region - Turkmenistan alone has the world’s fourth-largest proven natural gas reserves. And, as technology improves, there will likely be even more resources discovered in the region.

Europe desperately needs new alternatives to Russia, upon which it is heavily dependent, while Turkmenistan needs major export partners other than China. If the draft agreement that was leaked on the Internet becomes official policy, it will probably happen when the 5 Caspian states meet in Aktau, Kazakhstan, in August.

But do not hold your breath. Even though each year brings new rhetoric on how an agreement will soon be reached, nothing ever materializes. Perhaps this time will be different.