Russia has picked a curious time to restart natural gas imports from Turkmenistan, a year before it plans to open a giant pipeline to China that would compete with Central Asian supplies.

The purpose was to negotiate a resumption of gas imports from Turkmenistan starting on Jan. 1 following a Russian cutoff that has lasted several years, the news service reported. «It was mentioned that at present, substantive talks on this issue are being held between Gazprom and its Turkmen partners, and specific agreements will be reached in the very near future,» Turkmenistan’s official TDH news agency said.

In an interview with Turkmen TV channel Vatan, Miller said the 2 sides had also discussed cooperation in the processing and gas chemical sectors, although the near-immediate restart of imports was the main goal. «But right now, the priority issues that we need to resolve literally in the coming months are issues concerning purchases of Turkmen gas starting Jan. 1, 2019»  Miller said.

Details of planned volumes and prices were not disclosed. The urgency was unusual on several counts. Most notably, the 2 sides have not resolved their long-running dispute over Russian demands for a retroactive revision of Turkmen gas prices dating back to 2010.

In 2015, Gazprom brought suit against state-owned Turkmengaz in a Stockholm arbitration court for $4.6 billion after Ashgabat complained that Russia was making only partial payments for supplies. Gazprom cut its annual imports from Turkmenistan sharply in 2015 to as little as 2.8 billion m3 from 10 billion m3 (bcm) the year before. Russia then stopped purchases altogether in 2016.

Dependent on exports to China
It is unclear whether a deal to resume Turkmen supplies will depend on a settlement or whether the lawsuit and new deliveries can take place side by side. In February, Russia showed no interest in resuming imports or negotiations, but Deputy Energy Minister Anatoly Yanovsky said that contacts might be possible toward the end of the year, Interfax reported.

The timing suggests that Gazprom has its eye on the importance of Turkmen gas sales to China and its own interests as a supplier when its giant Power of Siberia pipeline opens for deliveries to the Chinese market starting in December 2019. Since the Russian cutoff and a similar suspension of exports to Iran in January 2017, Turkmenistan has been wholly dependent on its exports to China.

The gas-rich but isolated Central Asian nation has become China’s leading supplier since a 2,000-kilometer (1,242-mile) pipeline through Uzbekistan and Kazakhstan opened in late 2009. Last year, Turkmenistan exported about 33 bcm to China, Azerbaijan’s Trend news agency reported. The volume represented nearly 35 % of China’s total gas imports and about 14 % of consumption in 2017, despite a series of equipment breakdowns that reduced deliveries last winter, aggravating China’s gas shortages.

Turkmenistan is scheduled to supply China with 38.7 bcm this year. That volume would compete with the 38 bcm that Russia plans to pump through its 4,000-kilometer Power of Siberia line, with initial deliveries of 5 bcm per year in 2020 rising to full capacity perhaps in 2025.

Edward Chow, senior fellow for energy and national security at the Center for Strategic and International Studies in Washington, said that Russia’s renewal of imports from Turkmenistan could give it competitive influence over supplies and prices for China.

Another explanation for Russia’s sudden interest is that it could be linked to improved prospects for a Trans-Caspian gas pipeline from Turkmenistan following the recent settlement of some maritime legal issues among the Caspian Sea’s 5 shoreline states. Russian demands on supplies could be intended «either to block Turkmen gas flows west or to be in control of them if it ever were to happen,» Chow said.

Raising suspicions
Gazprom’s intentions have raised suspicions because it appears to have no need for Turkmen gas. In a speech at the St. Petersburg International Gas Forum, Miller boasted about Gazprom’s unrivaled ability to meet the demands of both its western and eastern markets with its 35 trillion cubic meters of recoverable gas reserves.

«We can meet any demand, be it in the domestic market here in Russia or in the markets of Europe or Asia,» he said, noting that Gazprom’s exports to Europe were already running at record levels this year.

Miller also took a swipe at China’s troubles with getting sufficient supplies from Turkmenistan last winter, suggesting that it would have no such problems with Russian gas. We should understand that, unfortunately, the current suppliers of pipeline gas to China cannot ensure flexibility amid seasonal fluctuations, he said.

«Let me emphasize that … ramping up supplies in excess of the contractual amounts via Power of Siberia is the quickest way of resolving the issue. This option is currently under discussion,»  Miller said. Additional supplies from the Power of Siberia line could reach 5-10 bcm per year over the 38-bcm contracted amount. Miller said that Gazprom would cover any extra demand using its own resources, according to Reuters.

Miller has yet to discuss Gazprom’s reasons for wanting to resume imports of Turkmen gas after a 3-year lapse, but exports to Russia are unlikely to improve Turkmenistan’s ability to supply China at the same time.

Twists and turns
The record of Russia’s dealings with Turkmenistan in the post-Soviet period are full of twists and turns with starts and stops for imports of Turkmen gas. In the 1990s, Russia effectively controlled Turkmen exports through the Soviet-era network of the Central Asia-Center (CAC) pipeline system, often steering deliveries toward late-paying markets like Georgia and Ukraine.

Despite demands from western nations for access to Turkmen resources, Russia remained the main obstacle to building a Trans-Caspian pipeline for over 2 decades. In response to competitive threats and Russian shortfalls, Gazprom struck a blockbuster 25-year deal with Turkmenistan in 2003, calling for imports to reach as high as 80 bcm annually starting in 2009.

But those volumes never materialized as international prices slumped and Russia sought to renegotiate terms. A «Precaspian»  pipeline, which Russia promised to carry more Turkmen gas along Kazakhstan’s coast, was never built. In 2006, the roadblocks led to a breakthrough agreement by Turkmenistan’s late President Saparmurat Niyazov for exports to China, sealing a 30-year deal to supply 30 bcm annually, also starting in 2009. 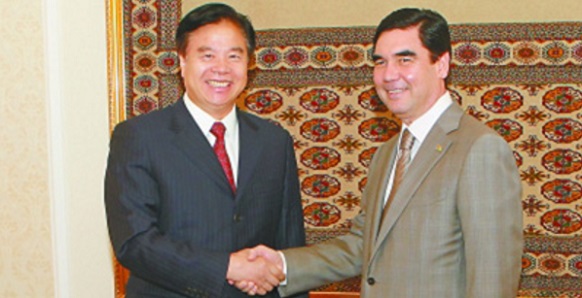 China quickly followed with huge investments in Turkmen gas fields and agreements to build its Central Asian pipeline system through Uzbekistan and Kazakhstan. Ashgabat’s relations with Moscow soured further in 2009, when a CAC pipeline explosion on Turkmen territory halted exports altogether after Gazprom abruptly reduced import volumes with little or no notice.

Gazprom declared another pause in its contract with Turkmenistan in 2016, citing «the changed situation on the international market,»  accepting no imports for the past 3 years. It is unclear now whether the condition of the underused CAC pipeline network will allow a restart of exports by January, even if the 2 sides agree.

But Gazprom’s maneuvers are unlikely to be lost on China as it negotiates with Russia for a 2nd gas route from Western Siberia and additional volumes from the Russian Far East. China is sure to have more leverage than Turkmenistan in dealing with Gazprom, but Russia’s strategies in advancing its interests and its record of disputes could also give Beijing reason for pause in negotiating for additional supplies.