The payout ratio is defined as the portion of net income that is paid to the investors...

The payout ratio is defined as the portion of net income that is paid to the investors as dividends. The rest of the income remains at the company.

How can the striking difference of the payout ratio between the Russian oil and gas companies and their European counterparts be explained.

According to accepted premises, companies operating in mature industries should pay cash dividends to their shareholder in order to prevent the management of the company investing funds in low or negative yielding projects. On the other hand, some companies can reinvest earnings in their businesses and earn a return in excess of their cost of capital, which means that investors could be better off allowing share prices to appreciate over time instead of collecting annual dividend checks.

Russian oil and gas companies, unlike their Western counterparts are operating in an environment which is requiring a great deal of investment in order to further explore oil and gas fields in Siberia. Moreover, pipeline projects have to be realized and the equipment should be modernized. Additionally, the availability of capital on international markets is still uncertain for Russian companies. Therefore it could seem justified to hold back some earnings.

What Russian companies are concerned, the questions of the ownership have to be raised. In most Anglo-Saxon countries like the U.S. or U.K. stock ownership is often dispersed and it is claimed that each individual shareholder has only limited incentives and ability to monitor the management. The major conflict in the governance of companies, accordingly, appears to be between powerful managers and small outside shareholders. Dividend pay-outs are seen as a means to reduce the cash flow that managers can use at their discretion.

In Russia however, dividends signal the severity of the conflict between the large, controlling owner and small, outside shareholders. Large shareholders often have the discretion and the incentives to extract private benefits of control. This incentive arises because the block-holder bears only a fraction of the costs of these payments but receives the full benefits. Dividend payments, however, guarantee a pro-rata pay-out for both large and small shareholders. Dividends are therefore an ideal device for limiting rent extraction of minority shareholders. The large shareholder, by granting dividends to small shareholders, can signal his unwillingness to exploit them.

As already shown, we find that the existence of large block holdings, which prevails in the Russian companies, result in significantly lower payout ratios. To make the link to the resulting performance, we compare the yields of the year 2002 of the already mentioned companies with the highest payout ratio to the ones with the lowest payout ratios. 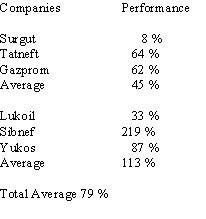 It can be clearly seen, that on average, the companies with the higher payout ratios show the better performance and no company with a low payout ratio reaches the average performance of all six companies. This can be interpreted that the investor community does not yet trust the corporate government of Russian companies.

The recent development of company announcements concerning the increase of dividends can be seen in this light. Lukoil announced to increase the payout ratio to over 25 per cent this year. It is estimated that Russian oil and gas companies will continue increasing payout ratio and increasing the standards of corporate governance. This should lead not only to more recognition of the world?s investor community but to further investments in the Russian oil and gas sector.