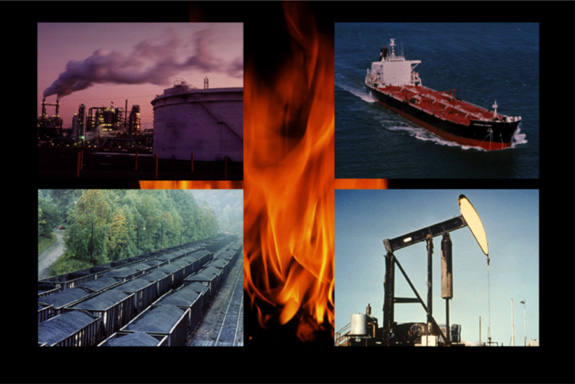 While the American Clean Energy & Security Act (Waxman-Markey bill) works its way through the U.S. Senate, many Americans are wondering just what is clean energy. This first article of a series will break down the types of energy resources we currently use, fossil fuels, nuclear power, hydroelectric power, renewable and biomass energy sources and you will decide just which resources are considered to be clean energy.

According to the Merriam-Webster dictionary clean means to be free from dirt or pollution and energy’ s definition is “ the capacity of acting or being active.”

The dictionary now has a definition for carbon footprint, which truly defines whether an energy source is clean or not.

There is a fine line which is often blurred when people discuss clean energy. Some “ energy“ spokespersons say it’ s clean when it is burned at the power plant, reactor, or refinery if it gives off little to no air pollution, such as greenhouse gases (GHG) leading to global warming, or the release of chemicals harmful to the environment like sulfur dioxide, mercury, lead, dioxins, carcinogens or other pollutants harmful to humans.

However, everything is interconnected, just like our homes are connected to an electrical grid. All energy is created by a resource and the question as to whether something is “ truly” clean energy has more to do with the following: The extraction of the resource and its environmental impacts, transportation energy use and associated pollution, the energy used to produce it into a viable product, and the energy and resources to create infrastructure (refinery, power plant, generator, reactor) to produce the energy. Finally, this includes any harmful waste that remains once the energy has been exhausted from the resource. Therefore it goes beyond the GHG burned strictly at the plant and includes the GHG produced everywhere along the route to its end destination.

Therefore clean energy is not really an appropriate term, because all energy for modern day living requires resources, transportation, and infrastructure. The more appropriate term is to call it “ green energy”. The definition of green energy is energy produced using a low carbon footprint and less pollution from its emergence to its disposal.

Here’ s an outline of fossil fuel energy resources used in Colorado. Which ones are truly clean and green, or more accurately, green and low pollution? Are there any that fit this definition?

Colorado gets 70% of its electricity from coal and our state is the 8th largest extractor, (it should not be called production as the animals and plants that became coal are no longer producing it here in Colorado) of coal in the United States,. A quarter of all the coal found in the world is found in the U.S.

Many environmentalists dispute the possibility of “ clean coal”. This brings to mind the management of waste in general. If a bird is trapped in an oil spill and is lucky enough to be cleaned what happens to all the oil? Does it disappear into thin air? Does it suddenly become something clean and healthy for the environment? The same questions arise on the cleaning of coal. The coal is “ cleaned” but what happens to all the hazardous toxins? Do they become something non-hazardous? What about all the sludge ponds (coal ash) flooding into the rivers and ground water in Appalachia?

Considering the effects of carbon dioxide, coal cannot be considered clean unless the CO2 is removed and safely and permanently sequestered. The process of sequestration takes considerable energy resources and according to Wikipedia the costs of this method would increase energy costs of coal by 25%-40%. There are many unanswered questions about the feasibility of this technology (never demonstrated on a commercial scale) and whether the CO2 can be safely stored.

In Appalachia large hilltops are being blown up daily to extract the coal. This practice scars the land and has a negative impact on the environment and to the residents living in these areas. While the coal industry may argue that if coal extraction ceases that jobs will be lost, the fact is that fewer people are working in mines than in the past as machines and explosives are replacing men and women.

One practice is to place the fly ash into concrete to contain it for awhile, but again coal is a huge energy consumer and a dirty resource being carted by the tons several times a day through Denver. Remember that coal contains toxins like mercury, which makes fish hazardous to consume. Sulfur dioxide is released through the burning of coal and is carried through the rain clouds and will poison lakes and forests through acid rain. Is this considered clean or green energy?

Colorado has a great deal of natural gas which is found in Weld County and on the Western Slope, but much of it is exported to other states. Colorado's natural gas usage ranks 13th of all the states according to Statemaster.com. The natural gas found in Colorado mainly originates from methane produced from coal beds found deep underground. With so much natural gas, a gas pipeline has already been built from Colorado to states in the Midwest and that pipe is currently being extended further. It has already been responsible for substantial increases in natural gas prices in Colorado.

While this energy resource is considered to have the lowest air pollution levels than of all the fossil fuels, it has proved to be a health hazard to many rural Colorado residents. For instance, just a couple of months ago Weld County residents found that chemicals pumped into the ground to extract gas through hydraulic fracturing, as well as some gas, mixes with the water table and contaminates existing private water wells. Residents can literally set their tap water on fire. Is this healthy for the environment and for the people and the animals that rely on clean drinking water? Weld County residents are not the only ones suffering from the side effects of natural gas extraction. Many on the Western Slope have had to deal with this “ formality” for years.

Recently Representative DeGette introduced the FRAC bill which Colorado’ s Democratic Governor Ritter opposes and DeGette has since backed down under pressure from the governor. The bill is designed to strengthen regulations protecting these rural Colorado residents from the current practice of hydraulic fracturing (pronounced «fracking»). Is this considered clean energy?

Colorado has some crude oil, and a lot of oil shale. Oil shale is much more difficult to extract than crude oil, which makes it more expensive. Extraction of oil shale also does substantial damage to the environment and requires large amounts of water. Water is not a luxury here in Colorado. In addition nasty chemicals are pumped into the ground to aid the extraction process.

The U.S. imports crude oil from Canada, Mexico, Saudi Arabia, and Venezuela (the top four importers) and last year we received 9,212,000 (average) barrels per day. We consumed 19,498,000 (average) barrels of crude oil and petroleum products per day in 2008. Crude oil and the petroleum products (created from crude oil) are refined and transported over long distances to finally arrive at the gas stations, car part stores, and into the many household products we use like cosmetics, cleaners, plastics, household goods, furnishings, clothing, pesticides, fertilizers, herbicides, etc.

Furthermore, oil refineries are not being built in the U.S. due to strict environmental standards enacted in the 1980’ s and the high cost to build “ environmentally friendly” refineries. The oil companies’ solution is to import oil refining from other countries, if the Markey-Waxman bill includes the low carbon emissions standards (the basis for the bill). According to the oil companies it would cost them more to refine it here than to have it imported. However, isn’ t that increasing the carbon footprint through transportation and creating more carbon? How is that clean?

In order to get a grasp on how much we depend on oil, take a look around your home. Try to find something that isn’ t made of plastic, wrapped in plastic, or contains petroleum products, etc. This includes most standard carpeting, electronics, and many man made materials like nylon, polyester, vinyl, etc. Remember that crude oil and petroleum products are fossil fuels and are not renewable.

Some may remember the Exxon Valdez oil spill in 1989, which spilled an estimated 10.8 million gallons of crude oil into Prince William Sound. It wiped out the fishing industry there and destroyed wildlife. It was the largest American environmental disaster of its day.

However a much larger environmental disaster is taking place daily in America and it isn’ t being mentioned on the nightly news. If we exclude the petroleum production industry, we (everyday Americans) are leaking many more gallons of petroleum products than the Exxon Valdez did into the streams, creeks and oceans. These «oil spills» originate from leaking cars, petroleum leeching from the blacktop, illegal dumping of waste oil, and from the products we use in our yards, parks, and in agricultural fields. According to NOAA, our daily runoff makes up to 80% of all pollution in our waterways.

Fertilizers are the most deadly culprit to marine life, among many others. When we think of fertilizer (most of it petroleum based), we think of beautiful tomatoes and green gardens, but the nitrogen that helps plants grow also kills other life by increasing algae growth. Petroleum based fertilizer also results in lower vitamin and mineral crops, a serious health impact throughout the world today. Increased algae growth depletes oxygen levels in the waterways. At the mouth of the Mississippi River there is a “ dead zone” (please see this author’ s previous article called Springtime green tips). Where the oceans meet the rivers there is only a moonscape devoid of life. Is this clean energy?

Being clean and green starts with you!