Liquid gas: production technology of one of the main trends of the industry 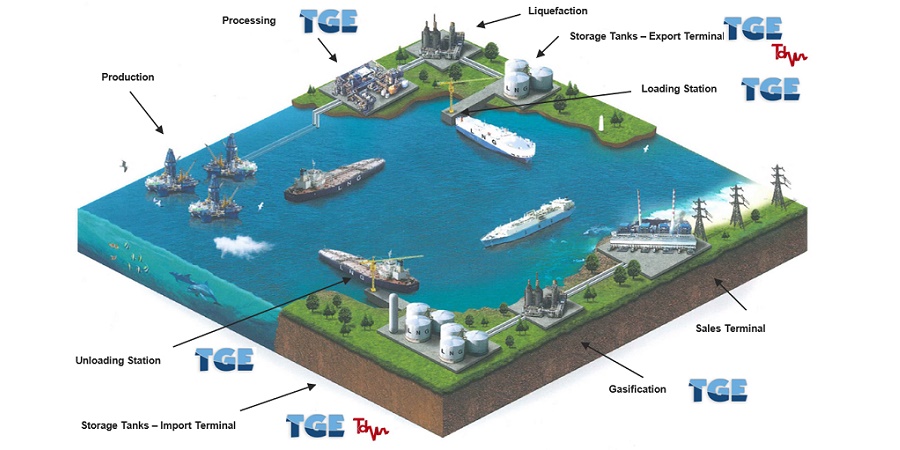 Moscow, 26 Aug - Neftegaz.RU. It is common knowledge that the global market for liquefied natural gas (LNG) is becoming increasingly wider every year, reflecting not only a significant increase in the supply of these products to the Asia-Pacific region, but also a significant increase in liquefaction capacity worldwide. In the present article, Neftegaz.RU. answers the following questions: why LNG is becoming more and more popular, why liquefaction technologies are considered to be one of the most promising and which companies make a significant contribution to the development of this market segment

Why to make gas liquid?

First of all, it’s necessary to understand what is liquefied natural gas or shortly LNG. This is natural gas, 75-99% composed of methane, artificially liquefied by cooling to -160 ° C for storage and transportation purposes. During liquefaction gas decreases in volume by about 600 times. LNG is a colorless, odorless liquid whose density is 2 times less than the density of water. In the liquid state, it is non-flammable, non-toxic and non-aggressive. In other words, LNG is a safe, environmentally friendly liquid with high energy characteristics and an octane rating.

It is interesting to note that in industry natural gas is liquefied both for use as a final product, and for use in combination with low-temperature fractionation of APG and natural gases, which allow to separate from them gasoline, butane, propane, ethane and helium.

LNG is produced at special plants, which, most often, are located in ports, if we are talking about large-scale production. From the terminals, LNG is pumped into gas carriers and is sent on a journey by sea. At the arrival point, LNG undergoes regasification (a reverse liquefaction process) and is pumped into pipelines. So NG reaches its end consumer.

Why the popularity of LNG in the world in recent years began to grow so actively? The fact is that liquefied gas, firstly, allows you to connect new players to the market who are far from consumers, and, secondly, it will play an increasingly important role as a motor fuel for vehicles, primarily - for ships, since it allows to significantly reduce harmful emissions into the atmosphere.

Russian LNG supplies are likely to be sent, not only to the “traditional” Asia-Pacific Region, but also to those countries that are not provided with gas pipelines (it is primarily about the United Kingdom and parts of Southern Europe).

LNG: the secrets of "cooking"

How does liquefaction happen? Converting natural gas to a liquid state is a multi-step technology. At each stage, the gas is compressed 5-12 times, then cooled and transferred to the next stage. 1 ton of LNG is about 1.38 thousand m3 of natural gas. Actually liquefaction occurs when cooling after the last stage of compression.

First all impurities are removed (carbon dioxide, sometimes minimal residues of sulfur compounds), then water is extracted, which otherwise could turn into ice crystals and block the liquefaction plant. The next stage is the removal of most heavy hydrocarbons, after which mainly methane and ethane remain. Then the gas is gradually cooled.

Purification and fractionation are realized, as is the main part of cooling, under high pressure. Cold is produced by one or several refrigeration cycles, allowing to reduce the temperature to -160 ° C. Then the gas becomes liquid at atmospheric pressure.

As of today 2 technological processes are used:

In industrial LNG production, liquefaction cycles with the use of an external refrigeration unit (principles of external cooling) operating on hydrocarbons or nitrogen are most effective. In addition, cycles on refrigerant mixtures are widely spread and the single-flow cascade cycle whose specific energy consumption is 0.55-0.6 kWh/kg LNG is used more often than others.

After liquefaction, LNG is placed in specially insulated storage tanks and then loaded on gas tankers for transportation. It is interesting to note that during transportation a small part of LNG is invariably “evaporated” and can be used as fuel for the engines of the tanker itself. Upon reaching the consumer's terminal, the liquefied gas is unloaded and placed in storage tanks.

LNG storage facilities are divided into 2 types - underground and above-ground storage. In addition, the tanks may have a horizontal and vertical arrangement, which directly affects their shape and characteristics - for example, horizontal tanks resemble a bullet and are designed to store liquefied gases under high and medium pressure, while vertical tanks have relatively low pressure.

Where to store LNG?

LNG storage facilities are divided into cryogenic or pressurized tanks. In addition, the tanks may have a horizontal and vertical arrangement, which directly affects their shape and characteristics - for example, horizontal tanks resemble a bullet and are designed to store liquefied gases under high and medium pressure, while vertical tanks have relatively low pressure.

The LNG receiving terminal, as well as storage tanks, are less complex structures, if we compare them, for example, with an export terminal, but, nevertheless, their construction also requires the highest competencies from construction companies. Not every company can design and build a gas storage facility from the very beginning, so oil and gas companies use the services of proven specialized organizations, such as TGE Gas Engineering, which has complete tools for such work. For almost 40 years on the market, the company has earned world-wide fame and reputation as one of the most experienced companies.

The company independently develops and builds each turnkey project, consistently guaranteeing quality and results. Today, TGE Gas Engineering is engaged not only in the construction of LNG storage facilities - its professional interests include the organization of transshipment terminals, the design of LNG liquefaction plants, integrated gas treatment plants, tank design and much more.

For many years TGE Gas Engineering team has implemented more than 2 million m3 of installed tanks in Asia alone, and the total value exceeds 3.2 million m3.

TGE Gas Engineering regularly expand its presence around the world and opens new offices in all major cities of the world, including Russia - here you can find the company's office in St. Petersburg.