It's time to buy Transneft shares

As we consider, in 2008 preferred shares of Transneft can become a profitable investment. The average prognosis of the leading world and Russian analysis agencies concerning the potential growth of the shares accounts to 11.4%.

As we consider, in 2008 preferred shares of Transneft can become a profitable investment. The average prognosis of the leading world and Russian analysis agencies concerning the potential growth of the shares accounts to 11.4%.

However, the huge dispersion of the evaluation of Transneft shares does not allow us considering the given average prognosis to be a reference point to decide whether to include the company’s equity in investment portfolio or not. Transneft preferred shares are worthy to take into account. From the technical point of view, the shares are in a long-term rising trend. When the quotations rocketed in 2005 (almost by 400%), the shares were overbought with the result that their price fell from 81800 rubles per share in January 2006 to 35809 in June 2007. To have a fuller appreciation of the prospective price development one should consider some essential facts of the business of the company.

From our point of view, the coming merger of Transneft and Transnefteproduct will have a favourable impact on the Transneft stock quotation. Under the existing tax treatment which takes up more than 89% of the profit from the export crude oil sales, for the Russian companies it is becoming more profitable to refine oil domestically and sell the already made petroleum products abroad.

Russian oil refining companies vigorously increase their refining capacities. That is, without merging with the refining company, Transneft would have borne losses in two points at once. First of all, the distance “between the oil production site and a buyer” is shortening to the distance “between a place of the oil production and refinery”; and secondly, from refinery one transports the ready made petroleum products, rather than crude oil, and this is the prerogative of Transnefteproduct. Now after merging with Russia’s oil transporting company, the renewed Transneft will even benefit, getting advantages from the higher rates of the oil products transporting.


,The merger with Transnefteproduct will also give essential advantages from the synergistic effect. The two companies have similar field of activities and services, and the majority of the petroleum products pipelines duplicate the oil pipelines, and that’s why the Transnefteproduct’s planned staff reduction and, consequently, the substantial reduction of the relative transaction costs will make a favorable impact on the joint company’s shares.

The absolute advantage of Transneft is its national status. The government protects the oil transportation business from new members and doesn’t encourage the constructing of the pipelines by non-governmental companies. As early as in 2003 the joint project of the biggest Russian oil firms Lukoil, Yukos, TNK, Sibneft, and Surgutneftegaz on construction of the new pipeline Western Siberia- Murmansk, comparable to the Eastern Siberia- Pacific Ocean pipeline, didn’t get support and had not been launched.

The monopoly status of Transneft allows the company in the course of time to raise transport rates beyond all bounds. For example, in 2008 the transport rate is to increase by 19%. 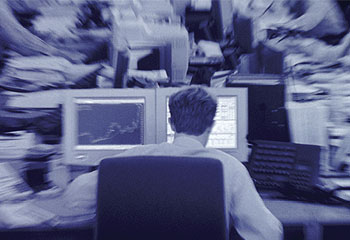 Also one should mention the professional geopolitical strategy of the company. As noted above, Transneft, enlisting the support of the government, is constructing the large Eastern Siberia-Pacific Ocean pipeline of 4188 km length and 80 million tons per year estimated capacity. This pipeline will allow providing the oil-starving South-East Asian countries with oil, and, if the Russian government decides to construct 60-km branch to China, it will help deliver oil to the world’s largest population country, where the number of cars increases every year as the nation becomes richer.

The second noteworthy project of Transneft is the Burgas-Alexandroupolis pipeline, developed in order to reduce the dominance of Turkey in supply channels of Russian and Kazakh oil, transported by tankers through the Turkish straits of the Bosphorus and the Dardanelles to Novorossiysk. When the Burgas-Alexandroupolis pipeline come into force, oil will be delivered from Novorossiysk to Burgas by tankers, from Burgas to Alexandroupolis by the pipeline, from thence it can be delivered by tankers to any consumer.
Such scheme allows boosting oil supplies to Europe, avoiding any blackmail from Turkey and keeping prices unchanged for the ultimate consumers, what will make Russian and Kazakh oil more competitive. 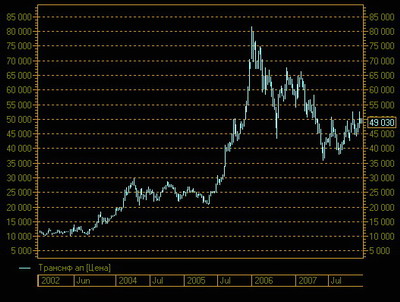 The Eastern Siberia-Pacific Ocean pipeline project is a shining example. The original estimates of the project of 6 billion dollars have already been increased twice. Furthermore, the launching of the first part of the pipeline was postponed from the end of 2008 till 2009. In addition, the state management is focused on for a long-term profit, rather than for the preciseness of the stock price figure and the permanent income of the investors.

In result we consider that in 2008 the Transneft’s shares quotations can resume growth. We expect the price boost to 60 000 rubles per one preferred share to the end of 2008, which is about 20 per cent gain from the current price, and rise to 90 000 rubles in 2009.